My children have a branch of their paternal tree that originates in Finland.  We had the most amazing trip last summer to the area just south of Vasa, Finland to see where the husband’s ancestors lived.  I have found several photos relating to this branch of the family.

This photo appears to be a trip Wendla Batmaster took back to Finland in 1930 to visit family.  It also indicates I need to look for a passenger ship manifest to find Wendla coming back to the United States in that year. 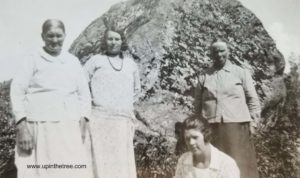 Grandma “Great” lived to be over 100 then fell & broke her neck.  In Finland

I am not sure who wrote on the back of this photo but I am inclined to believe it was Shirley (Gingg) Pope.  This reasoning is that she refers to Grandma Long (Wendla Batmaster).  Wendla Batmaster remarried after the death of her husband Charles Mattson.  Her second husband was John Long.  Even today, a few generations youger everyone calls her Grandma Long.  It is hard for me to see Agnes Mattson (Shirley’s mom) referring to her mom as Grandma Long.  Other photos Agnes owned say Mom in reference to Wendla.

I am not sure how accurate this description is.  Far right in the photo is Brita Maria Marander, Wendla’s mother.  She lived to 81 (died 1939). This dates her to 72 years old in this photo.  I do not know how old Brita’s mother, Maria Stina Alskog, lived.  If she was born approximately 1835, theoretically, the person at the left could be Maria Stina Alskog. In 1930 she would have been 95.  I am not convinced the person at the left looks 95 years old. Also the person is referred to as Great Grandma Batmaster.  This points to Jonas Batmaster’s (Brita’s husband) mother, Ulrika Johannesdotter. We do know that  only lived to 47.  Unfortunately, I do not have any other photos of the woman at the left.  I do not know who she is.  There is family resemblance but I am just not sure who she is.

I recently came into possession of many photos and documents for my husband’s ancestors.  I will be making an effort to post these on Wednesdays to share with family.

My husband has an ancestor we call Grandma Long.  She was born Vendla Båtmäster in 1881 in Sundom, Finland.  She immigrated to San Francisco with her brother, Isaac.  Our family traveled to Finland last summer.  We had the best time visiting the area where Vendla’s family lived and spending time with cousins. 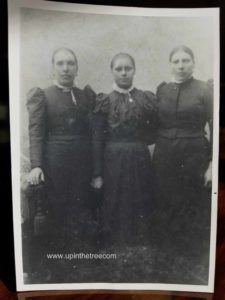 The backside of the photo is written in the handwriting of Agnes Mattson.  It reads:

Vendla Long on her 18th birthday with two Aunts.  Elda Huggar and Gustava

One aunt is Charley Johnson mother.

I have confirmed that Vendla did have two aunts on her father’s side with these names.  This information was found in the Finnish Church Records.

I have returned from an incredible trip abroad.  Part of our trip was to Finland for my husband to attend a conference and the family to visit the homeland. The hubby, kids, and I met up with my in-laws for this portion of our trip.

After a few days relaxing in the Åland Islands between Sweden and Finland, we took the ferry into Turku, Finland. We drove north towards the area around Vasa, Finland.  To break up the drive, we spent the night in Kristinestad, Finland.    This is where I learned something new about research methodology.

Let me back up and give you some information important to this story.  My husband has 2nd great grandparents who immigrated from the area outside Vaasa, Finland.  Grandma Shirley (hubby’s grandmother) was the granddaughter of Wendla Båtmäster and Charles O. Mattson. Forty years ago Grandma Shirley and Grandpa John visited the family that still remained in Finland.

Grandma Shirley passed away in 2003.  She was the main contact from our branch of the family to the family from Finland.  Before our trip, Grandpa John was able to put together a list of names and addresses he still had.  We were unsuccessful with the phone numbers before our trip began.

While on the trip, we decided to focus on finding one person from the list who we knew was young enough to still be alive.  I will call her Anna Lena for privacy.  Anna Lena came and stayed with my in-laws during the 80’s when she was about 16 years old.  My husband was about 9 or 10 years old during this visit.

We had tried phone numbers and Facebook but our biggest problem seemed to be marriage.  We did not know what Anna Lena’s married name was.

Plan B, if we could not find Anna Lena, was to drive to the addresses we had and cross our fingers that the current occupants would have information about my husband’s ancestors.

The owner of our hotel in Kristinestad checked us in. He was incredibly welcoming and nice (a theme we found with every person we met in Finland). We spoke for a few minutes about the area and how we, as Americans, came to visit.  My father-in-law (will be referred to as J) used the opportunity to say we were trying to visit family from Sundom and Malax (just south of Vasa).  He explained we had a list of names and addresses that was old and were having a hard time contacting family.

The hotel owner offered the phone book because it included towns south of Vasa.  J was unable to find Anna Lena in the book.  The hotel owner told us to wait a minute because he was going to try to look up something online.  He returned from his office with a slip of paper which had a phone number for a woman named Anna Lena.  Her last name was very close to the information we had.

We were so excited to have found the information we were looking for but bummed we would not be able to visit Anna Lena. During dinner, my husband received a text from Anna Lena herself!  Quickly the conversation moved to a telephone call. Anna Lena was happy to speak with us.  Apparently she had tried to reconnect with our family too but did not remember enough information to find us in California.  She said most of the people on our list of family had passed in the last several years but she would make some phone calls to see if anyone else could see us.

With Anna Lena’s help, we spent the next day in Sundom and Solf visiting with J’s 3rd cousin and his family.  We also got to meet a couple of people in the prior generation who showed us where some of the “old” family lived.  It was an incredible moment when Henrik brought out a framed picture of his and J’s common ancestors, Jonas Båtmäster and Britia Maria Marander.  We have seen copies of the photo from Grandma Shirley’s trip but the original was amazing. The other highlight was watching my kids play with their 4th cousins even with a language barrier.  They had so much fun together.

So lesson learned.  Don’t be scared to be the person who asks questions! Although the hotel owner lived more than an hour south of Sundom, he got us started in the right direction.  If J had not spoken up, we would not have gotten to enjoy the best day of our vacation.

If you want to have solid research skills, they need to include talking to anyone who will listen.  You never know who has the missing piece.

Last month my family had the opportunity to travel to Finland.  It was part work for my husband and part vacation travel.  Our adventure started when we met up with my husband’s parents, J and S, who had been on their own vacation. Our travel plans included arriving in a few days in the Åland Islands on our way to Finland.

J was very excited to be going to Finland.  His great-grandparents, Wendla Båtmäster and Charles Oscar Mattson, had immigrated to the United States from Finland.

Although Wendla and Charles came from towns only 13 kilometers apart from each other, all family oral histories say they met in San Francisco through the Star of Finland Relief Society.

Grandma Shirley, J’s mom, did an excellent job of documenting her family in the 1980’s and 1990’s.  I am so thankful to have digital copies of her research!  While she had information regarding family in Finland for Wendla, there is really no further information for Charles.  Part of this is due to the fact he died the young age of 33.  His obituary states he left behind (besides his immediate family) a brother, Matt Mattson, and a sister, Mrs. Lena Carlson.  Grandma Shirley had also found out Charles was from the town of Malax, Finland.

Basic searches for Charles did not have any positive results before our trip.  I have to admit, I was not very thorough with my research due to the crazy that was the end of the school year.

Back to our trip.  The Åland Islands were included in our trip because Grandpa John (J’s dad) had such fond memories from the trip he and Grandma Shirley had taken 40 years ago.  We arrived early in the morning after an overnight ferry from Stockholm.  The morning was spent enjoying Mariehamn, the capital of the Åland Islands. We then made our way to the summer cottage my husband had found for us to stay at.  It was gorgeous!

Every afternoon was spent enjoying the front porch.  The wifi made it one of the best offices my husband has ever used.  I spent some of the porch time on my tablet trying to find more information about Charles Mattson and his family.

Then it happens.  I get a hit for Lena Carlson at Ancestry.com.  And not just a little hit.  A big, bright shiny moment of search success.

It turns out Lena Carlson was just one of variations of names for Charles’ sister.  And I was lucky enough to have most of them listed on the Petition for Naturalization I found.

No wonder why I was having difficulty finding her!  I have found Lena under every possible variation of the above name  plus the additional variations using her husband’s last name, Victor. More proof the family was from Malax, Finland but again no names for Charles’ parents.

So what is the serendipitous moment? About half way down the Petition for Naturalization are questions about Lena’s husband Victor.  Guess where he was born?  Mariehamn, Åland Islands, Finland.  You will notice  Åland is spelled with an “O.”  This is not surprising at all since  Å with a ring above it is pronounced  as “oh”.

Seriously, how crazy that I had traveled a little more than 5,300 miles to find a document online that says Lena’s husband was born only 10 miles from where I sat on the porch with the most incredible view?!