My husband’s grandmother was known to everyone as June. The only person who called her Gwendolyn on a regular basis was my husband. He did it just to push her buttons. I think he got away with it because he was the oldest grandson.

June’s parents were Percy Fuller and Lauretta Palmatier. June was born 17 and 15 years after her older brothers (Raymond and Marshall). Her parents were 38 and 36 at the time of her birth.

I realized in 2018 I did not have a copy of June’s birth certificate. With help from my mother-in-law, one was ordered. When the certificate arrived, I was so surprised to see that June was almost not June’s name! I wish I knew the story of how her middle name changed at the last moment. It was a good choice because the name June fit her.

Loretta Elizabeth Palmatier (January 29, 1887- January 21, 1979) is my husband’s great grandmother.  She was married first to Percy Fuller and then to Alexander Fraser.  Born in Nebraska, she lived there until moving to Chicago, Illinois in her forties.  Her last move was to California to be closer to her children, Marshall and Gwendolyn (June).

I know from talking my mother in law that the family brought Loretta to Novato, California a few weeks before her death because she was sick.  Clearlake is about a two hour drive from Novato.  Loretta’s daughter and granddaughter were both living in Novato at the time of Loretta’s death.

Charles Palmatier is my husband’s g-g-grandfather.

I have heard stories from my husband’s grandmother about how her grandfather was a Pony Express rider.  There are very good records of who worked for the Pony Express and Charles Palmatier was not one of them.  The obituary below proves that although the story was not totally accurate, there was definitely a grain of truth in it.  This is the longest obituary I have ever found.  Charley must have been a well-known and liked man in town. 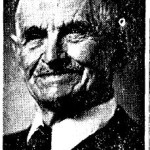 C.E. Palmatier, Oldest Pioneer of All, Laid to Rest

Charles Palmatier, Valley county pioneer and one of the county’s oldest and most highly respected citizens, passed away at the Ord Cooperative hospital early June 1st, at the age of 95 years, three months and twenty-three days.  His death was the result of a stroke which he suffered May 23.  He was born in New York state in 1856.

He leaves to mourn his passing, his beloved wife, Ettie, whom he married in 1884; three sons, Marshall of Wilmington, Calif., Edmund, of Boise, Ida, and Ellery of Chicago; four daughters, Stella Grindey, Loretta Frazier and Grace Rowe of Chicago and Alice Reed of North Hollywood, Calif.; eleven grandchildren, seven great-grandchildren, and one great-great-grandchild, besides his many friends and acquaintances.

Mr. Palmatier came to Nebraska in 1878, homesteaded at Geranium in 1879.  He was a mail carrier of the early days, and ran the post office at Geranium for 17 years. Leaving the farm in 1910, he was a resident of Ord until the time of his death .  A man of absolute integrity, he will long be remembered by the old friends and neighbors who knew him best.

C.E. Palmatier, Oldest Pioneer of All Laid to Rest

Funeral services were held from the Methodist church at 2:30 Sunday afternoon, Rev. R.E. Daughelee officiating, with Hastings and Pearson in charge of arrangements.  Lucille Tolen sang, with Mrs. Viola Kellison at the piano.  The pall bearers were Elmer Zlomke, Don Dong, Wilbur Rogers, O.E. Patchen, Robert Noll, and M.B. Cummins. Mr. and Mrs. John Haskell had charge of the flowers.  Burial was in Graceland cemetery.

Charles Palmatier was born in New York state, at Youngsville, Sullivan county, March 9, 1856, and first came to Nebraska in 1878.  With him came a friend, John S. Wheeler, who once lived north of Elyria. They walked from Grand Island to St. Paul, and the next day got a job off-bearing brick in a brick  yard owned by a man named Dory DeVry. This yard was located on the river near St. Paul.

Mr. Palmatier’s next job was working for Zach Leftwich in a mill on Spring Creek, He worked in the mill and also fed hogs.  His first work at Ord was teaming in flour for S.S. Haskell, who at that time ran a store in the old Transit House, now located on the corner north of Hotel Ord, but then located about where the U.P. shops used to be.

It was a rather risky trip in those days.  It took two days each way and camp was usually made over night near Scotia Junction.  He stayed over night on some occasions with as much as $40 to $60 in his pocket, and that was a lot of money in those days.  He ran quite a chance of being held up and relieved of it, but happened to be lucky.

It was not far from that time that Palmatier came to Valley county and filed on a homestead where he later located the post office of Geranium.  As the law required residence on the land only a small part of the time, he got out and worked wherever he could to get money to live on.  He was helping put up hay on the Calamus between the Skull and the Bloody when he got his first mail job.

Another man had the contract but he got Charley to do the carrying for him.  She started carrying mail on horse back and carried it until the famous blizzard of 1880 hit on Oct. 15 and 16.  His route was between Hartsuff and Fort Niobrara, a distance of 160 miles through the hills.  He lost two horses in that blizzard and never went back to the job.

He would sometimes see as many as one hundred Indians on a single mail trip.  Mostly they were peaceable, but a mail carrier can take no chances so he had little to do with them.  One day he saw an Indian traveling to head him off, and tried to get past him, but got headed off.  He asked the red man what he wanted and he answered “Tobac.”

It happened that Charley had brought a plug of chewing tobacco at the store.  It was about an inch square and four inches long.  He broke it in two across his knee and gave the Indian the smaller piece.  He looked as though he would like to have the larger piece, but he did not get it.

While living in New York state Mr. Palmatier had taken a fancy to a girl somewhat younger than himself, and in 1881 he went back and persuaded Ettie Conklin to come back with him as his wife and make a home for him on his quarter section of land, which he had proved up on that year.  They lived on the homestead and raised a large family of children.

Palmatier also carried mail for “Bill” W.H. Williams from St. Paul to Ord and on to St. Helena.  He never had a chance to go to school, but nobody would believe it after visiting him.  His mind was clear until the last, and he never was at loss for the answers for any questions friends asked him.

In the early ‘80s solon Pierson, a brother of Perry and uncle of Claence [sic], started the original Geranium post office.  Later John Wolfe took it over and then it went to Herbert Losey.  Mr. and Mrs. Palmatier got it from Losey and kept it for some time after the turn of the century, when it was discontinued with the coming of rural free delivery.  Mrs. Palmatier had much of the work of taking care of the office while her husband was engaged in other work.

There was no salary connected with the office and he got only about $30 for the year’s work, which of course was not worth the trouble.  After a while the post office closed at Manderson a few miles north and Geranium got the extra business.  H.F. Rhodes was postmaster of the Manderson office.

Palmatier did any kind of work he could get in those days.  He worked on the railroad between St. Paul and North Loup before the line was extended to Ord.  He says that J.J. “Bud” Shirley case his first vote at the Palmatier house in Geranium.  When Mr. and Mrs. R.B. Miller, still living in Burwell, were married at the Dies House in Ord, Charley was at the wedding.

He was one of the few men still living who knew how to build a sod house.  He never belonged to any secret society, and did not believe in them.  Geranium was on the wagon route from east to west, and people always planned to stop at the Palmatier home over night.  They were always welcome.  He lived to be the oldest living mail carrier, the oldest Quiz subscriber and probably the oldest living citizen in Valley county.

In 1910 Mr. Palmatier built a home in east Ord and the family has lived there since that time.  In 1911 they made a visit to their old home in New York state.  He was always a busy man, and had a fine garden at his home when death called him.  The fine character of both Mr. and Mrs. Palmatier is shown by the loving care of their children for them.

Etta May Conklin is my husband’s great-great-grandmother.

I recently pulled out my husband’s grandmother’s bible to use as an example for how to digitize items using a camera.  To my surprise, from the middle of the bible, fell a couple of newspaper clippings. Big mistake on my part to not check the rest of the bible to see if there were any hidden gems.  At the same time, I am so happy that I did pull out the bible and find these gems! 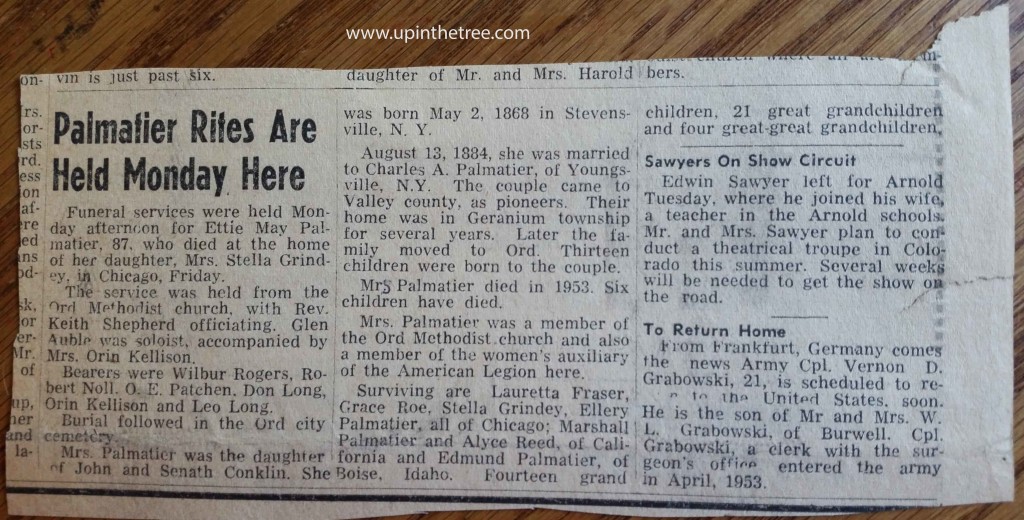 Funeral services were held Monday afternoon for Ettie May Palmatier, 87, who died at the home of her daughter, Mrs. Stella Grindey, in Chicago, Friday.

The service was held from the Ord Methodist church, with Rev. Keith Shepherd officiating. Glen Auble was soloist, accompanied by Mrs. Orin Kellison.

Mrs. Palmatier was the daughter of John and Senath Conklin.  She was born May 2, 1868 in Stevensville, N.Y.

August 13, 1884, she was married to Charles A. Palmatier, of Youngsville, N.Y.  The couple came to Valley county, as pioneers.  Their home was in Geranium township for several years. Later the family moved to Ord.  Thirteen children were born to the couple.

Percy Fuller is my husband’s great-grandfather.  He was born 4 June 1885 most likely in Comstock County, Nebraska.  He was married to Loretta Palmatier.  They divorced when their third child, my husband’s grandmother, was little.  After that I have found Percy in Sterling, Colorado and Hood River, Oregon.  Percy passed away in Oregon on January 6, 1965.  He is buried in Pine Grove Cemetery, Hood River, Oregon.