William J Dempsey (1923-1998) is the brother of my grandmother, Mary Dempsey.  His remains were interred at the Riverside National Cemetery.

My grandparents, Mary and Jay Capelli, are interred at the same cemetery. After burying my grandmother last year, we stopped at the kiosks at the administration building.  The kiosks are to available to look up and locate the burial site of your family member.  These are extremely helpful as this is a very large cemetery.  The kiosk will print a map and burial site information for you.

Unfortunately, we were unable to visit Uncle Bill.  The columbarium were his ashes are interred was closed to the public as they were doing construction on a new building.

If you are preparing to visit the cemetery (or any military cemetery) the information is also available online at the U.S. Department of Veterans Affairs website.

Last year my grandmother, Mary Dempsey (1921-2017) passed away.  She was buried with my grandfather, Celio “Jay” Capelli (1914-2009) at the Riverside National Cemetery.  While at the cemetery we stopped at the administration building.  Outside of the building, there are kiosks available to look up and locate the burial site of your family member.  These are extremely helpful as this is a very large cemetery.  The kiosk will print a map and burial site information for you.

If you are preparing to visit the cemetery (or any military cemetery) the information is also available online at the U.S. Department of Veterans Affairs website.

My grandmother still holds the original marriage record for her parents, Charles Francis Dempsey (1894-1986) and Josephine Amelia Gamble (1894-1976).  I had the opportunity to digitize this document a few weeks ago at Christmas time.  It blows my mind that there are original documents in our family that are almost 100 years old!

I, T.W. Rosensteel hereby certify that on the 11th day of Feb one thousand nine hundred and 20 at St. Joseph’s Charles F. Dempsey and Josephine A. Gamble were by me United in Marriage.

in accordance with license issued by the Clerk of the Orphans Court of Allegheny County, Pennsylvania.

I was recently browsing the record collections on Family Search when I stumbled across Pennsylvania County Marriage Records, 1885-1950.  Since my Dad’s family lived in and around Pittsburgh, Pennyslvania, I immediately clicked on the record set.  A quick search brought up the marriage record for my grandparents! Yipee!

The three images included an outside cover, the application, and the portion returned to the county by the Priest who officiated their wedding.  The information is all items I already know about my grandparents.  It is nice to have something with their signatures on it. 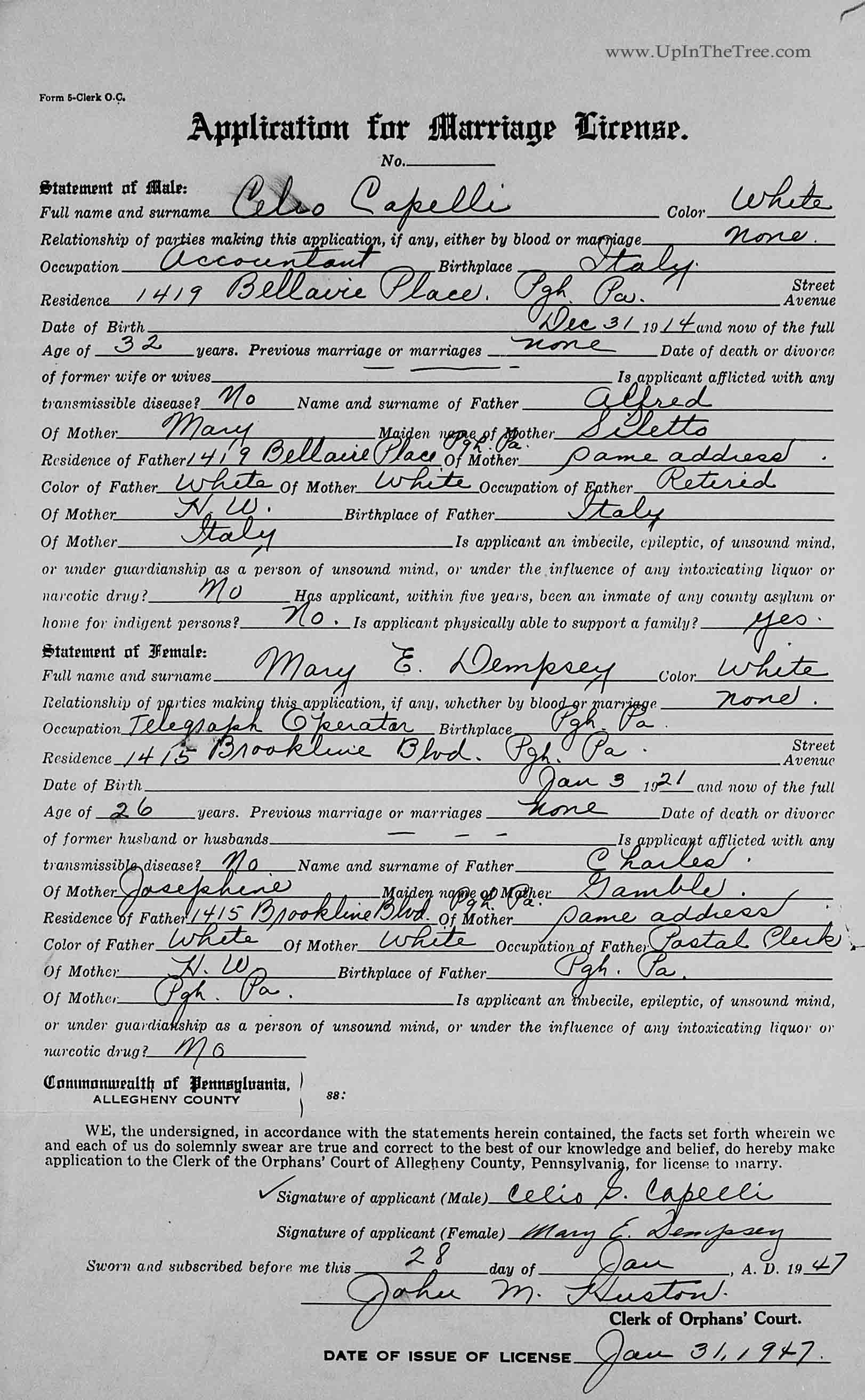 I have been missing from my blog the last couple of weeks.  Although I try to plan ahead and have posts written for when times are busy I did not get ahead of the 8 ball this time.  Instead of worrying about it, I have been having fun living life.  My younger daughter had her first birthday, my dog had her fifth birthday,  my parents came and spent time with us, we went to the first stage of the Tour of California bike race, attended the wedding of my husband’s cousin, celebrated at a baby shower, and my brother-in-law received his MBA.  It has been a great couple of weeks around our house!

When I read Randy Seaver’s Saturday Night Genealogy Fun challenge, I thought it would be a great way to get back into the blog swing of things.

I was surprised to find that I can get all the way to number 41 on my Ahnentafel Report.  Number 41 is the unknown wife of Edward Dempsey.  She is also the mother of James Dempsey.  James is the grandfather of my paternal grandmother who immigrated to the United States from Scotland with the surname Dempsey. My grandmother’s maiden name is Dempsey.

I have to admit that it has been a long time since I looked at this branch of my family tree.  According to James’ death certificate, he was born in Scotland on 15 April 1864.  He passed away 13 April 1959 in Pittsburgh, Pennsylvania.  He is buried in Calvary Cemetery in Pittsburgh.  I have found James in the 1900, 1910, 1920, and 1930 Federal Census enumerations.   Depending on which census you look at, James immigrated from Scotland in 1883, 1885 or 1888.  Due to the birth of his first child in 1887, I believe it is more likely he immigrated between 1883-1885.  James became a naturalized citizen in 1903.  I have received a copy of the naturalization paperwork but it really could be any James Dempsey in Pittsburgh as there is no identifying information included.  James married his wife Mary Ann O’Neill about 1885.  They had five children all born in Pittsburgh, Pennsylvania.

I found James’ father’s name on his death certificate.  His mother’s name is listed as unknown.  Looking at this branch of the family tree makes me realize that there is still a lot of work to do here.  I need to do additional research on my grandmother’s grandparents.  The first item on my to do list is to call my grandma and see if I can jog her memory for any further family information.  Another first step is to find an obituary for James Dempsey.  I definitely need to spend some time working on a research plan for this side of the family.(That sounds like a great follow-up blogpost!)

A huge Thank You to Randy Seaver for this week’s Saturday Night Genealogy Fun Challenge.  It was fun to do and has me excited about researching a side of my family I didn’t realize I was neglecting.  It is also wonderful because it gave me a minute to appreciate how much research I have accomplished in the last 15 years.  I really have found so many stories about my family and love every single on of them!

I was doing some work on my re-organization of digital genealogy files yesterday.  I found a digital census image that was not added to my genealogy software.  It was the 1900 Federal Census for James Dempsey in Pittsburgh, Pennsylvania.

I printed a census form and transcribed the image.  I also added the citation to my genealogy software and to the digital image.  I was reviewing the transcription and realized that I had no note of James Dempsey being a naturalized citizen in my software.  I was so excited to find a new piece of information!

I did not understand the importance of those two little letters “Na” when I started researching my family.  I am sure that I was in such a rush to find more census images that I did not follow up with the information that I had.

So learn from my mistake.  Review the research you have already completed.  There might be a little gold nugget hiding in what you have already collected.  I am adding to my goal list to do a complete review of the documents I have when I finish my organization project.

I ordered the naturalization paperwork for James Dempsey from NARA.  I am hoping that this will lead me to information pinpointing exactly when he immigrated to the United Stated from Scotland.  It might also have information about where in Scotland he is from.

Today is the 4th of July.  The day to celebrate the independence of this great country.  The most common ways to celebrate are barbecues, fireworks, and parades with lots of American flags.  I would also like to celebrate by telling you a little about my paternal grandfather.  Celio “Jay” Gordon Capelli lived the American Dream.

Jay was born in Cassano Canavesse, Turino, Italy on December 31, 1914.  His parents were Matteo Ciardonei and Adele Siletto.  On March 22, 1920, Celio (5 years old) and his father, Matteo Ciardonei, arrived in the United States on the SS Dante Aligheri.  According to the ship’s manifest, Matteo was deported March 31st because he had been diagnosed with tuberculosis.  Matteo was a strong man because he left his young son in the United States with his sister-in-law, Mary (Siletto) Capelli.

Jay grew up in the Capelli household in Pittsburgh, Pennsylvania with his 3 cousins, Mabel, Bruno, and Elsie and his aunt and uncle, Mary and Alfredo (Fred) Capelli.  Jay became a citizen of the United States on February 25, 1937 when he was 22 years old.  He also changed his name at this time to Capelli.  My grandfather attended Duquesne University, majoring in accounting.  He also served as a Quartermaster in the Army during World War II.

My grandfather met my grandmother, Mary Dempsey in Pittsburgh and they married February 15th, 1947.  Later that year,  they migrated out west to California with my grandmother’s brother.  They settled in Los Angeles and had three children.  The oldest boy being my dad.   The kids grew up in Anaheim and my grandparents moved to Mission Viejo during the 1970’s.

Jay was ninety four when he passed away just over 2 years ago.  He was a hard working man who loved his family deeply.  I remember being in high school when he finally retired from being a CPA at 80.  He loved to go bowling and did so until his late 80’s.  There are many family photos of Jay camping with his family.

He was hard of hearing in his later years.  I will never forget the first time I visited him after he got his hearing aids.  There was a look of astonishment on his face when I spoke to him.  I realized that my voice had been out of his hearing range for years and he was excited to hear what I sounded like.

One of my most favorite memories of my grandfather is from Christmas about 7 or 8 years ago.  I had found the passenger manifest for his arrival in the U.S. on EllisIsland.org and ordered a copy of the manifest and a photo of the ship to give to him for Christmas.  He was so amazed by the gift!  It made me so happy to be able to bring a piece of his past to him.

It is amazing to think that my grandfather did it all in this country.  He immigrated here as a young boy, learned a new language, grew up in a loving family, attended university, became a U.S. citizen, served his country in war, found the love of his life, followed his dreams out west, and raised a family.  He really did live the American Dream. 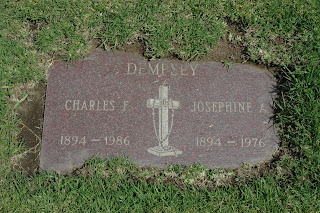 They are buried together at the San Fernando Mission Cemetery in San Fernando, California. 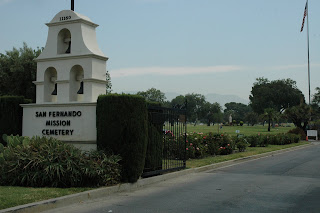