Mary Eugenia Bradley is my great great grandmother.  She was born 18 December 1867 in LaSalle County, Illinois.

Frank Switzer was Mary’s second husband.  They married in 1906, four years after Mary was widowed with four surviving children (two children from her first marriage died young).  Mary and Frank would have a son, Milford, in 1909.  Mary would be widowed again in 1934.  Frank passed away in Halstead, Kansas.  Mary would live another sixteen years before passing away at her daughter’s house in Wellington, Kansas.  Frank and Mary are buried together in the Halstead Cemetery, Halstead, Kansas. 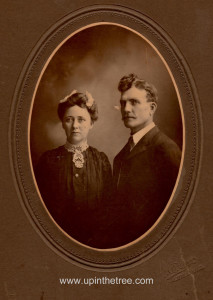 I am still on the hunt for the death records and probate for Catherine (Carey) Bradley.  She is the mother of Mary Eugenia Bradley, my great-great-grandmother.  There is a family story that states Catherine is not the biological mother of Mary.  I have been trying to prove or disprove this story.  You can read my previous posts: Mystery Monday – Who was Mary Bradley’s Mother and Mystery Monday – Mary Bradley Update.

My last plan of action was to:

Since that last post, I have done some research in the first two bullet points.  I thoroughly searched the Cook County, Illinois death records on Ancestry.com, Familysearch.org, and the Illinois State Death Index for variations of Catherine or Kate Bradley.  There were many results but none appear to be my Catherine.

The last place that I can identify Catherine as living is the 1910 census.  She is living with her oldest son, Walter and his family in Chicago, Cook, Illinois.  Her age is listed as 70.

Since I hit a another wall, I moved on to locating more information about Mary’s brothers starting with Walter.  Unfortunately, Walter passed in 1912 from a brain aneurysm.  I tried to find his wife, Hannah, and their 4 children (Eugene, Margaret, Walter, and Bernadette) in the 1920 census but have been unable to do so.  I have been playing with just listing first names and relationships but this has not worked yet.  I do not know if Hannah remarried after Walter’s death.  I would like to find the family to see if Catherine was still alive and living with them in 1920.

I moved on to Mary’s younger brothers.  I believe that I have found them living in Texas and Nebraska in the 1910, 1920, and 1930 census.  Catherine is not listed as living with either of them in these census enumerations.

So where did Catherine die? and when did she die?  In order to help myself see the bigger picture, I created a timeline for Catherine with all of the information I know about her.  I am glad to have the timeline but it did not produce any “wow” moments.  Catherine had lived in Chicago for 25 years at the time of Walter’s death.  It is hard to imagine her moving but you never know.

My updated research plan is to find an obituary for Walter Bradley in 1912.  Hopefully, it will list more information about his immediate family and if his mother survived him.  I will also try to locate a marriage record for Hannah Bradley to see if she remarried.

My local genealogy society is the Marin County Genealogical Society.  I love attending our monthly meetings.  Not only do I usually learn something new from the presentations, it is fun to talk with people who have the same passion for family history.

On Wednesday night this week, the Marin County Genealogical Society had its monthly meeting.  The guest speaker was Anthony Hoskins.  He gave a great presentation entitled, “You May Not Be Who You Think You Are, or How Y-DNA Testing Broke Up That Old Family Of Mine.”  As the title suggests, DNA testing shattered years of documentation he had collected.  It was a very interesting story that does not have an ending yet.

Tony Hoskins’ discovery was a surprise and a little earth shaking for him.  He has proven that there is an illegitimate child in his direct line.  While I feel for Tony, I still felt a little jealous on Wednesday night.  I will never be able to prove Mary Bradley’s mother with DNA.  That family line weaves in and out of males and females so I am unable to use the Y chromosome test.

It is back to the paper hunt for me and hopefully there is enough of it to prove or disprove who Mary Bradley’s mother is.  I am still trying to pin down the death date for Catherine Carey in Chicago, Illinois.  I have too many options right now for the time frame I am looking at.  Hopefully, I can pare it down soon and find probate records that identifies if Mary was her child.

Mary Bradley is my 2nd great grandmother.  She was born 18 December 1867 in La Salle County, Illinois.  Her father was Charles Bradley.  Her mother is up for debate.  The death certificate for Mary states that Catherine Carey is her mother.  Stories passed down in my family state that Catherine is not her biological mother.  The story continues that Mary was forced on Catherine by her new husband, Charles.  I have written a blog post Mystery Monday – Who was Mary Bradley’s mother? to summarize what I already know.

I sent an inquiry to the Catholic Church, St. Columba to see if they had any birth or baptismal records for Mary Bradley.  This is the church that Charles Bradley and Catherine Carey were married at 31 days before Mary was born.

In my email inbox on Tuesday was a reply!  I was excited to hear a response since I sent my letter several months ago.  Unfortunately, there are no records of Mary Bradley.  The wonderful woman who assisted me looked in a multi-year range from 1865-1874 but was unable to find anything.  She did confirm the 18 November 1867 marriage of Charles and Catherine.

So there is still on answer to who is Mary Bradley’s mother.  I need to make a plan of attack for further research.  First, I need to look into what other records are available in La Salle county, Illinois.  There may be something I missed the first time around.  I also want to find the death records for Catherine (Carey) Bradley in Chicago.  This includes her death certificate, obituary, and any probate records filed in the county.  Also on the list is more research on Mary’s brothers, Walter, Norbert, and Charles.  It might be wise to move sideways instead of up in this case.  I may also do a search to see if anyone with the last name Udell was living in La Salle county in or around the 1860’s.  That is a shot is the dark so it is low priority.

Mary Eugenia Bradley was born 18 December 1867 in LaSalle county, Illinois.  Her parents are listed on her death certificate as Charles Bradley and Kate Bradley.  The informant listed on the death certificate was her daughter, Matilda ‘Tilly’ (Bender) Case.

Both my mother and one of her cousins remember their ‘Grandma Bender’ (Effie May Bender), Mary’s older daughter & Tilly’s older sister, telling the story about how her mother, Mary Bradley, was born illegitimately to a Jewish woman and forced onto her father’s new bride to raise.  They both also remember a story that Grandma Bender remembers a visit to Mary by the supposed biological mother.

Here are some of the ideas I have researched in my attempt to find an answer to this family story:

Census
An analysis of the census records is not clear either:

It is very interesting that after moving to Chicago, Kate (Cary) Bradley has indicated only 3 children are living when Mary is clearly alive in Kansas.

The marriage date for Charles and Catherine is only 31 days before Mary was born.  I find it very unlikely that a woman in 1867 would wait until she is 8 months pregnant before marrying the father of her child.  Considering the year, I would expect a woman to have gotten married as soon as possible to hide the fact she was pregnant before marriage.

Conclusions
I have not reached any conclusions about who Mary Bradley’s mother is.

I do find the evidence in favor of Kate Bradley being Mary’s mother on the thin side.  The only person who has stated that fact was Mary’s daughter.  She was obviously did not have first hand knowledge of the birth since she was not there.

There is also no proof yet that another woman is Mary Bradley’s mother.

The only clue I have to the mystery Jewish woman is that her last name might have been Udell.  This name was given to my mother’s cousin by Grandma Bender in a conversation.

I am following up on another research idea right now.  I have sent an inquiry to the Catholic Church, St. Columba, in Ottawa, Illinois to see if they have any birth or baptismal records for Mary Bradley.  This is the church that Charles and Kate got married at just a month before Mary’s birth.

I will keep you updated when I receive a response.