This summer I wrote about my project delving deep into the Italian Church records for the village of Cossano Canavese, Turino, Piedmonte, Italy. You can read about the Status Animarum Records here.

Yesterday, Facebook kindly sent me the memory from 10 years ago after my first foray into these records. This was a massive moment because it opened the doors to an entire branch of my family. I was floored to be able to say I knew the names of all my 2nd great grandparents.

To commemorate how far my research has evolved, here is a 7 generation chart with my grandfather, Celio Gordon Capelli (aka Celio Pietro Guiseppe Ciardonei) as the beginning of the chart. My deep roots in Cossano Canavese has led me to documentation for 174 direct ancestors and 11 generations added to my tree.

My next project is to work out which Maria Brunero born circa 1734 is mine. There are 4 possible candidates born 1733-1735. The plan is to build out the trees for all four families using the parents names to identify which set of parents (Maria’s parents) are my 6th great grandparents.

Pietro Ciardonei and Antonia Ciamporcero are my paternal great-great-grandparents.  They lived their entire lives in Cossano Canavese, Piedmonte, Italy.  This is a small town outside of Turin in the foothills of the Alps.

Pietro was born about 1845.  Antonia was born 4 February 1859.  They married on 20 March 1872.  Their marriage produced at least 7 children.  Three of their first four children died before reaching the age of three.  My great grandfather was the first son to survive childhood.  I can only imagine what difficult times Pietro and Antonia faced losing so many children so young at the start of their marriage.

My favorite part of this record is the signature for my g-g-grandfather.  Although I am not very surprised, it still makes me a little sad that my g-g-grandmother could only mark her name with an “X.”

I have been able to research my Italian ancestors because Family Search has a microfilm that contains the church records from their small town.  Below is a digital copy of Pietro and Antonia’s marriage record. 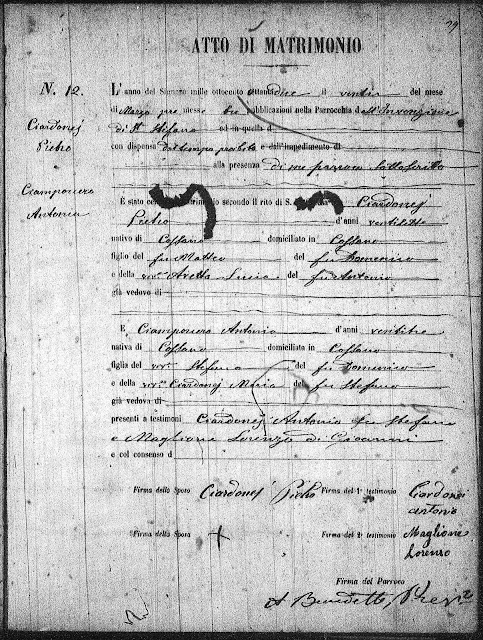 I have jumped deep into researching my Italian line the last couple of months.  I have been slowly combing my way through baptism, marriage, and death records to piece together my family line.  I am still working on these records but want to share an interesting story of analysis of a portion of my goldmine.  I warn you now that everyone has the same name.  Proceed with caution!

The story begins with my great-grandfather Matteo Ciardonei.  Baptism records show he was born to Pietro Ciardonei and Antonia Ciamporcero.  Additional baptism and death records show that Pietro and Antonia had at least six children as follows (records for this microfilm end at 1898 so there may be children born after that date):

There was also a baptism record for a Matteo Claudio Ciardonei born 8 November 1875 to Pietro Ciardonei and Teresa Salarano.  My first inclination was to think that this was a first marriage for Pietro.
I next went on to find the marriage records for Pietro & Antonia and Pietro & Teresa.  A quick glance had me thinking that these were the same person.  When I arrived home and analyzed the documents a few days later, I was not so sure.  The only thing that was for sure – I was immediately thankful that almost all of the church records listed a person’s father, his father, and sometimes the person’s mother and her father.  In addition each name indicated if the person was alive or deceased.
Pietro Ciardonei married Teresa Salarano on 20 February 1875.  Pietro is listed as the son of living Matteo (who is the son of deceased Pietro) and deceased Lucia Avetta (daughter of living Sebastiano).  Teresa parents are listed as deceased Stefano and living Maria Bonello.
Pietro Ciardonei married Antonia Ciamporcero on 20 March 1882.  I was surprised to see that Pietro’s parents were slightly different than the prior marriage record to Teresea.  This Pietro’s parents are deceased Matteo (son of deceased Domenico) and living Lucia Avetta (daughter of deceased Antonio).
Are these the same Pietro Ciardonei?  It was time to go back another generation to try to find out.
I found the marriage certificate for Matteo Ciardonei and Lucia Avetta on my next trip to the library.  Again, I was finding and scanning as many documents as possible and doing the analysis at home.  Once at home, I looked carefully at the marriage certificate.  This Matteo Ciardonei married Lucia Avetta on 25 July 1846.  This seemed to fit Pietro for a possible estimated birthdate.  Matteo’s father is listed as living Pietro, deceased Matteo, deceased Domenico.  Matteo’s mother is listed as Maria Burghesio, daughter of deceased Domenico.  I paused here thinking, “wait, did the Priest confuse Pietro as the dad?  But wait he wasn’t born yet – these are his parents. O no, I have a problem. Are there two Pietro’s?!?”
I went on to note that Lucia Avetta’s parents were listed as living Sebastiano Avetta (son of deceased Matteo) and living Maria Franesio (daughter of deceased Michele).  I needed another trip back to the library.
On my next trip I quickly made my way back to the marriage records and started searching before 1846.  To my surprise, I found another marriage certificate for Matteo Ciardonei.  This time he was marrying Lucia Avetta in 1835.  Okay, now I was totally confused.  This town was Catholic to their last breath.  How is it that Matteo Ciardonei married Lucia Avetta twice?!
The 1835 marriage of Matteo Ciardonei to Lucia Avetta is a handwritten marriage record.  Although I have been unable to translate the whole thing yet due to a change of language from Italian to Latin, I can definitely see the names written in the paragraph.  Matteo’s parents are listed as Domenico Ciardonei and Maria Giandefio.  Lucia Avetta’s parents are listed as Antonio Avetta and Magdelena Giacometto (daughter of Ignatio).
I also came upon a death record for Lucia Ciardonei ne Avetta.  She died 17 July 1888.  The death record states that she was 74 at the time of her death.  This would give an estimated birthdate about 1813-1815.  Her parents are listed as Antonio and Magdelena.  The spouse is listed as Matteo Ciardonei.
It was time to compile an excel sheet to figure out just what I had here.  My excel sheet included columns for date, record type, name, name of father, father’s father, mother, mother’s fathers, spouse, and estimated birthdate.  After entering all baptism records, marriage records, and death records the families started to shake out.
Once on paper it became clear that Lucia Avetta in the 1835 and 1846 marriage licenses was the key to unraveling this mystery.  Each marriage definitely had a different Lucia (different parents).
I had two different Matteo Ciardonei’s marrying two different Lucia Avetta’s only 11 years apart.  Both of these couples had at least one son named Pietro.  Both Pietro’s had sons named Matteo (about eight years apart).
The death record for Lucia Ciardonei ne Avetta helped to solidify my argument for which Matteo and Lucia marriage was mine.  If you look back to the marriage certificates for Pietro & Teresa and Pietro & Antonia, you will notice that one Lucia is living while the other is already deceased.  “My” Lucia (daughter of Antonio and Magdelena) is listed as living.  This jives with Lucia’s death in 1888. The “other” Lucia passed away before 1875.
Here is a sketch of each family:

This blog post is being posted a couple of weeks after the fact.  I found this information a couple of weeks ago but life and some medical issues got in the way and I was not able to share this great information with you until today.  Please enjoy because I am still as excited today as I was on Tuesday, November 1st.

My grandfather is Celio “Jay” Capelli.  He was born to Matteo Ciardonei and Adele Siletto.  I have chronicled my grandfather’s story in several posts this Summer and Fall (an american dream, new documents add to the story of my grandfather, those places – cossano canavese, piedmonte, italy, and finding all 16 g-g-grandparents).  My grandpa’s family are the last hold outs in my quest to find the names of all 16 g-g-grandparents.

When we returned home from our wedding adventures (wedding wednesday – creating genealogy), I immediately logged on and ordered from FamilySearch.org the microfilm that contains the church records from Cossano Canavese, Piedmonte, Italy.   The Family Search index shows that the records contain baptisms from 1858-1899, marriages from 1651-1899, and deaths from 1669-1899.

The microfilm has arrived and I got a chance to look at the baptisms.  I am very happy that I did my homework and showed up with a cheat sheet of words in Italian.  It saved a lot of time in acclimating to another language.  I had great success!  I found the names of my missing g-g-grandparents!

I started by scrolling through the microfilm to see how it was organized.  Quickly, I found that for each year there was an index of names, birth dates, and certificate number that showed up at the end of the year.  In this small town there was anywhere from 10 to 43 baptisms each year.  There are about 10 main surnames that appear in the baptism records.

Working backwards from 1899, I found Adele Siletto first.  Her baptism record says that she was born 10 January 1892 to Guiseppe Siletto, son of Stefano and Ana Maria Maglione, daughter of Giarindo.  I was really excited to see that someone in the church had added additional information to her baptism record by hand underneath Adele’s name.  It also stated that she married Matteo Ciardonei on 25 December 1913 and died 18 January 1919.

I found Matteo’s baptism record next using the index of names for 1889.  Matteo Stefano Luigi Ciardonei was born 12 February 1889 to Pietro Ciardonei, son of Matteo and Antonia Ciamporcero, daughter of Stefano.  Again, additional information was hand written in stating the same marriage date and confirming the date of death as 14 March 1921.

I still can’t believe it.  I only wish that my grandfather was still alive to hear all about it.

I am excited to get back to the library this week.  My plan is to create an Excel sheet and transcribe the index pages for the baptisms.  Since this is a small town, it will not be too much work and will hopefully help untangle the web of families later.  I can then go through the baptisms for the Ciardonei, Siletto, Maglione, and Ciamporcero families to identify any siblings for Matteo, Adele, and their parents.  I will tie in the marriage records as I identify parents for each family group.  I do not plan on looking at the death records until I am done looking at the baptism and marriage records.