It is twisted but digitizing the documents I have is so fun.  I have items I to be excited about a second time.  In late 2014 I ordered a round of documents to try to identify where in Hungary my Mother-in-law’s family immigrated from.

One of the documents I received is the Death Certificate for Elizabeth Nagy.  Unfortunately, there was no specific town in Hungary listed but the certificate does include some previously unknown information.  The biggest being Elizabeth’s non-Americanized name (Erzi) is listed on the certificate.  The certificate also lists a cause of death.  And another variation of the maiden name show up too.  I now have three variations: Viro, Varro, and Verro.  My last observation is that my younger daughter shares the same birthday as her great-great-great-grandmother.

Since this Death Certificate, I have used other records including marriage and baptism records from Hungary to identify Teresztyne, Abauj-Torna, Hungary as the birthplace of Erzsébet Varró.

Indiana State Board of Health

If you read this blog regularly, you know that this past summer my family went on a trip that included Budapest.  I was hoping to visit the small town of Jablonca, Slovakia. This town is where my husband’s maternal gateway ancestors came from.  Unfortunately, the town is located three hours to the northeast and we were traveling west.

Finding the town where my husband’s maternal Hungarian ancestors immigrated from has been a difficult ride.  They were not one for leaving a lot of records in the United States that included juicy details.

This week I noticed a blog post about new indexed records on Familysearch that included some from Hungary. After seeing what was posted, I decided to search the catalog for Jablonca, Hungary.  I know that there is a microfilm of the church records for the town and was thinking about ordering it.  You will understand why I am ordering the microfilm now after my latest find.

To my surprise there is now red lettering on the description page for the microfilm that says: “Slovakia, Church and Synagogue Books are available online, click here.”

Of course, I immediately clicked through and searched for my husband’s great-grandmother, Mary Nagy.  And I found her!!  Not only did I find her baptism record, I found her father’s and his father’s.  In a matter of an hour, I traced the Nagy family back another 2 generations!  I have been doing the happy dance for days.

I feel so blessed to a genealogist during the digital age.  Don’t get me wrong, I love going to libraries and the smell of a courthouse makes me smile.  This discovery might be one that I would not have made anytime soon if it was not available in a digital form.  It also has my mother-in-law interested in her family history.

I can’t wait to see what I find in the Slovakia 1869 Census records!  Time for some record browsing online!  I also cannot wait to tie it all together with a pretty bow when I get to scroll the marriage and death records on the microfilm I have ordered!

As a genealogist you can find small tidbits about family almost anytime of the year.  If you are lucky there will be a huge break through every year or two.  I have hit the big time twice in the last two months.  The genealogy gods have been showering me with kindness this year!  My first great find about finding the signature for my 6th great-grandfather can be found here.

I have been trying to identify a hometown in Hungary for over a year now for my mother-in-laws paternal line.  We are planning a family trip to Hungary this summer so there has been a lot of work done to identify the family and where they came from.  So far my mother-in-law’s paternal grandfather is a concrete wall reinforced with rebar.

I have been working her maternal great-grandparents line as my last hope for finding a place to visit in the homeland.  They are John Nagy and Elizabeth Varro from Hungary.  On Ancestry.com, I found an entry in the Naturalization Indexes for several men named John Nagy.  I was pretty sure I found “my” John since he lived at the same address as my John Nagy did in Whiting, Indiana.

Back in early December 2012 I sent a request to the Indiana State Archives for the naturalization paperwork.  Thankfully, when I sent the request I noted it in my research log.

Fast forward to April 2013.  As I am getting ready to visit my parents in Virginia and do some research at the Daughters of the American Revolution library, I notice on my research log that I still have not received a reply from Indiana regarding John Nagy.  I sent them a follow-up email to check where in the queue I was since our trip to Hungary in August is fast approaching.  I received a reply that they had misplaced my original request and would look at mine quickly.  I then received another email a week later informing me that the only courthouse in Lake County, Indiana they do not have in the Indiana State Archives is the one I need.(Of Course!!)  I was so grateful because the email included information about who I needed to contact to get the records I was looking for.

My next step was to contact the Northwest Indiana Genealogical Society with my request for John Nagy’s naturalization paperwork.  Sure enough within 2 weeks a self-addressed envelope was delivered to my mailbox.  Genealogy Jackpot #2!

The Declaration of Intention lists his town of birth and his signature!!

Even better, his Petition of Naturalization is a goldmine of information.  John Nagy was born in Jablonca, Hungary 15 February 1862.  He met a woman named Elizabeth who came from the town of Tenestene, Hungary. They were settled in Jablonca when they had their first child, Mary (my husband’s great-grandmother) in March 1890.  In late July 1890, just four months after Mary’s birth, the family boarded the Red Star Line in Antwerp, Germany.  They arrived in New York City, New York the 8th of August.  The family continued their travels to outside Chicago and settled in Whiting, Indiana.  They had five more children between 1896-1905. 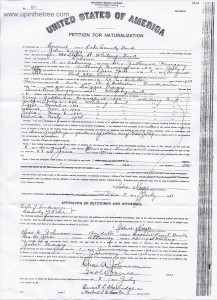 Holy Moly!  We have a town to visit on our trip this summer.  Jablonca now resides on the Slovakia side of the Hungary/Slovakia border.  It is about a three-hour drive outside of Budapest to the northeast.  I am so excited!!  My kids, my husband, and my mother-in-law will all get to visit a town of their direct line in Hungary/Slovakia.

My mother-in-law has told me that she wants to visit Hungary next year.  This is the land of her paternal line.  The only problem is that we do not know anything beyond her grandfather.  It is time to break down a wall!  I have to admit that I have not put much effort into this wall because it seems to be made of Eastern European concrete at first glance.

Her father, Walter, was born in Indiana in 1924 to Louis and Mary Radvanyi. Walter (Wally) was the 4th child and second son born to Mary and Louis.  His siblings were Julia, William, Violet, Gloria, and Angeline.

Family lore has Louis illegally immigrating to the United States around 1900 through Canada.  It also states that Louis came to the U.S. as a spy for Hungary and died when he quit being a spy in the 1930’s.  This story was told to my mother-in-law by her Aunt Julia (the oldest child).

What we do know is that Wally’s birth certificate confirms the names of his parents.  I have found Louis Radvanyi’s WWI Draft Registration Card.  It places Louis in Whiting, Indiana working for Standard Oil.  His birthdate is listed as December 28, 1883.  His nearest relative is his wife, Mary.  I have also found a marriage index that lists the marriage between Louis Radvanyi and Mary Nagy on November 21, 1914.

I have located the family in the 1920, 1930, and 1940 US Federal Census enumerations.  The 1920 census lists Louis and Mary along with their children, Julia and William.  There are three boarders living with the family.  This census also indicates that Louis came to the US in 1904.

The 1930 census again confirms known information about the family.  The family is listed as Louis, Mary, Julia, William, Violet, Walter, Gloria, and Angeline.  The family last name has lost its “i.”  This census puts Louis’ arrival in 1903 and Mary’s arrival in 1889.  The birthplace is listed as Hungary for Louis and Austria for Mary.

The 1940 census brings sad news.  Mary is now a widow and her son William, now 23, is the sole breadwinner for the family.  My mother-in-law remembers stories her father told of the poverty his family faced during this time period.

I have also found Mary in the 1910 census with her parents, John and Elizabeth Nagy.  Mary is the oldest of six children.  The year of birth (1888) matches known information.  Her parent’s birthplace is listed as Hungary/Maygar.  Mary is the only child in the family to be born in Hungary.  All of her siblings were born in Indiana.  This matches the information regarding arrival in the US found on the 1930 census.

The 1920, 1930, and 1940 census enumerations indicate that both Louis and Mary became naturalized citizens at some point.  I have tried to get copies of their records through NARA.  They were unable to locate any paperwork.

Did I mention that I do not know when Louis Radvanyi died?  The best information I have been given is that Wally was young.  For now, I have a ten year range to work with.

My plan of attack is to start catching up on some vital records. I have sent requests to the State of Indiana for death records for Louis, Mary, and William (the older son).  I have also sent a letter to Lake County to get a copy of the marriage certificate for Louis and Mary.  Lastly, I have sent off to the Hammond Public Library in Lake County for copies of the obituaries of Mary and William.  I also need to follow-up with the State of Indiana to see if they have any naturalization records for Mary and Louis.

I am hoping that this first round of attack helps take large chunks out of my wall.  I will keep you updated how my search progresses.