While pregnant with my second child I had a difficult time sleeping.  I would spend the those middle of the night hours playing Sudoku on my iPhone until I fell back asleep. 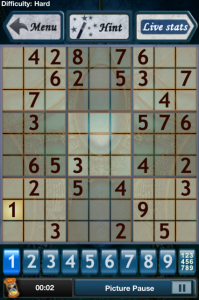 Sudoku is a logic puzzle.  The puzzle board is nine blocks high by nine blocks wide.  There are numbers placed in the puzzle to get you started.  The goal is to place the numbers 1 – 10 in each block, each column, and each row. The difficult part is that the numbers can only appear once In each box, column, and row. 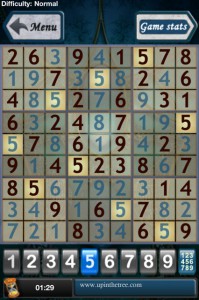 While starting a new board the other night, it occurred to me that a Sudoku puzzle has many parallels to the Genealogy Proof Standard.

Sudoku puzzles always begin with pre-positioned numbers to get you started.  When researching your family you begin with the information you know.  The pre-positioned numbers on a Sudoku board give you the clues to what numbers you can place next.  The information you start with in genealogy gives you clues to where to locate more sources.  A genealogist searches for all possible sources to locate more evidence.

3.  Analysis and Correlation of Collected Information

You continually analyze the Sudoku board as you play.  You have to use logic to identify the next open block and the correct number to place in that block.  You have to make sure it is the only number that can fit into that block.  To see if a specific number is the one that fits, you must look at the other numbers in the row, column, and block to make the decision.  Genealogy is similar in that you must look at all of the pieces of evidence in order to make a conclusion.  Each piece of evidence has to be analyzed for information and additional clues.  Together all the pieces (just like the rows, columns, and blocks) lead to the correct answer.

Sometimes you will place a number in the wrong box while playing Sudoku.  Eventually, you will get to a point in the board where a number will not work logically.  At this point, it takes some time but you have to work backwards to find the number that was placed incorrectly.  Once this is done you can again move forward with the correct logical conclusion.  In genealogy it is rare for all of the evidence to say the same thing.  The next step is to take a moment and explain why there are differences in the evidence.  Most are easily explained.  In some cases, it is more difficult but you always need to find out why there is a conflict before you can move forward.

A Sudoku puzzle is finished when you have written numbers in each of the squares so that all of the blocks/rows/columns are filled in.  Likewise with genealogy research, you are not finished until you write out your conclusion.  A written conclusion is important because it ties in all of the above parts of the Genealogy Proof Standard.

I have heard genealogy referred to as a jigsaw puzzle.  I like that analogy but think that a Sudoku puzzle is going to be my personal favorite analogy.  What is your favorite genealogy analogy?