Last week, I told you how there may be some conflict surrounding the estate of Willis Coffey, my 3rd great-grandfather.  You can read about it here.

Today, we will look at what is causing the fuss.  There are a few items to cover before we read the will. Willis Coffey was born in Russell County, Kentucky on May 2, 1804.  He married Velotty (Lotty) Haynes on March 23, 1828.  They had nine children: Louisa, Nebuzaradin B., Teckly, Sara Tiller, Mary Frances, Jackson, Lotty Emeline, Nancy, and James C. Coffey. Lotty Coffee passed away in October 1869 and is buried in the Stewartsville Cemetery, DeKalb, Missouri. Willis was remarried seven months later on June 15, 1870 to Susan Pickett Laffern.  Susan was much younger than Willis (born 1832) and then had a son together (Willis Franklin) in 1874 when Willis was 70 years old. Now that we know the family structure, the will will make more sense.

The lawsuit that follows the death of Willis Coffey will focus on the Will he wrote in 1885, 8 years before his death.

Transcription of the Last Will and Testament of Willis Coffey:

I, Willis Coffey, of the county of DeKalb, and State of Missouri, do make and publish this, my last will and testament.

1st, I give and devise and bequeath unto my beloved wife, Susan Coffey, during her natural life the following real estate (lands), situated in the county of DeKalb and State of Missouri, to wit:

The above described lands to belong to my wife during her natural life; and at her death, the said lands to become the property of my son, Willis Franklin Coffey.

2nd, I bequeath to my beloved wife, Susan Coffey, a sufficient am’t of provisions for the support of herself and my son Willis Franklin Coffey for the period of one year; said amount to be determined by the Judge of the Probate court.

3rd, I devise and bequeath unto my beloved wife , Susan Coffey, on horse, one milk cow, four pork hogs, and five sheep.  The above personal property to be selected by my said wife, and delivered to her by my executor.

4th, I give and bequeath to my beloved wife, Susan Coffey, two hundred (200) bushels of corn; and twenty (20 bushels of wheat, and if there be no a sufficient amount of corn and wheat on hand at my death, my executor is hereby directed to pay to my said wife the value of the deficiency, out of my estate.

5th, I will and bequeath to my beloved wife, Susan Coffey, all of my household and kitchen furniture of every description, whatever.

6, And as to the remainder of all my real estate (lands), I hereby direct my executor to sell the same at public or private sale, as he may think best, and to such person or persons as he may think proper and just, and I hereby direct my executor to divide the proceeds of said sale of my real estate as follows: to wit said proceeds to be equally divided between my children and grandchildren as follows:

7th  And as to all debts due and owing to me; I hereby direct my executor to sell the same at public or private sale, as he may think best and to divide the proceeds thereof, as above mentioned in the distributions of proceeds of real estate,

8th,  And lastly, as to all the rest, residue, and remainder of my personal estate, whatsoever, after paying all my just debts, I give  and bequeath to my son Willis Franklin Coffee three hundred $300.00 dollars, then the remainder is to be equally divided between my children and grandchildren as above described.

9th,  And I hereby appoint William M. Stigall, of DeKalb county Missouri as guardian and ensator(??) of my son Willis Franklin Coffey.

10rd[sic], I do hereby appoint William M Stigall, of DeKalb county and State of Missouri as the executor of this my last will and testament; hereby revoking all former wills and testaments by me made.

Willis Coffey is my 3rd great-grandfather.  I recently found his probate papers on Ancestry.com.  I am super excited about this find because the file contains 174 digital images.  With this much paperwork there must be a story!

The story begins with a flurry of paperwork between 28 September 1893 and 9 October 1893.  On the 28th of September a receipt was written by the manager of the Clarksdale, Missouri office of the Chicago Rock Island & Pacific Railroad for sending a telegram announcing the death of Willis Coffey.

A week and a half later, several people appeared at the county courthouse in Maysville, Missouri (the county seat).  Several documents were signed and witnessed on October 9, 1893.  First, the will of Willis Coffey was presented to the court.  I was very disappointed to realize one page of the will was not digitized.  Of course it was the page that was to lay out how part of the estate was to be divided among his heirs.  The last page of the will had a sheet of paper attached that stated the will had officially been recorded in DeKalb County.  This was signed by the local probate judge, W.A. Thornbaugh.

Next, W.F. Thornton appeared before the judge to swear he was present and signed as a witness on Willis Coffey’s will.  He also stated that James Adams (the other witness) was now deceased and his signature was true.  This was all signed to in the Proof of Will and witnessed by Judge Thornbaugh.

Another form was signed by the Probate Judge which states the will of Willis Coffey appoints W.M. Stigall as executor.  This was followed by a signed Executor’s Bond for $2000 for W.M. Stigall.  Also on the same form was an Oath for W.M. Stigall to sign.  The oath states that the executor will truly perform his duties as executor, including a perfect inventory.  Apparently W.M Stigall took this oath very seriously as most of the digital images in the Probate packet are receipts for every detail.

The last sheet in the Will papers was my favorite.  It is an undated hand written notice that says: “The court instructs the jury that the only issue in this case is whether or not the paper writing offered in evidence (and hereto attached) purporting to be the last will of Willis Coffee deceased, is his last will and testament. 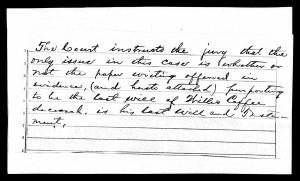 It is starting to get good!!  My next blog post will take a look at the Will in question.

Martin Strickler Will
Page County Court House
Book D, Page 208-209
Photos taken 20 November 2007 of Will Book D by Sierra Pope.
I Martin Strickler of the County of Page and State of Virginia do hereby make my last will and testament in manner and form following that is to say.
1st: I give and bequeath unto to my wife Anna Strickler during her life all of my house hold and kitchen furniture of every due scription (sic) and after her death I direct that the said property be sold at public sale and the money rising from the sale of said property is to be equally divided between my two daughters Rebecca Keyser the wife of Reuben Keyser & Nancy Foltz the wife of George Foltz.  I also give and bequeath unto my wife Anna for and during her life one third of the farm I now reside on.
2nd: I give and bequeath unto my son David Strickler and his heirs for ???? the farm I now reside on subject to the third I have allready (sic) given to my wife Anna during her life after her death, my son David Strickler is to have the whole farm containing three hundred and fifty acres by survey be it the same more or less being the land I purchased of I Strickler by my son David Strickler paying out to my daughter Nancy Foltz the wife of Geo. Foltz five hundred dollars to be paid in two annual payments two hundred and fifty dollars to be paid in and one year after the death of my wife Anna and the remainder in one year after as ???? the above named five hundred dollars is intended to make my daughter Nancy  Foltz equal with my daughter Rebecca Keyser which I have heretofore give my daughter Rebecca Keyser eighteen hundred dollars and my daughter Nancy Foltz thirteen hundred dollars.
3rd: I desire and direct that my land lying on Stony Run shall be sold on the following conditions.  Each tract shall be sold separate One tract I purchased of Jacob Aleshire containing on hundred acres be it the same more or less.  One tract I purchased of George Aleshire containing forty eight acres bit it the same more or less.  One tract I purchased of Emanuel Comer containing twenty five acres be it the same more or less I direct that my Executor hereafter mentioned shall sell as soon as convienent (sic) after my death the above named tracts of land on the following condition. One third of the money on each tract to be paid down and the remainder to be paid in three annual payments.  And the money arising from the sale of the above named tracts of land it is my desire shall be divided equal between my two daughters Nancy Foltz & Rebecca Keyser.
4th: I give and bequeath unto Martin Propts the farm purchased of James Hollensworth containing one hundred and forty acres be it the same more or less I give the above named farm to Martin Propts even for a bond he holds against me for six hundred and sixty dollars (or perhaps over that amount) But if the said Martin Propts is not willing to take the above named tract of land for the above named bond I then direct that the land shall be sold by my Executors hereafter mentioned upon the same terms of the  other above named lands. And after paying all of my just debts & expenses of settling my estate should there be any bonds left I desire and direct the remainder to be equally divided between my daughter Nancy Foltz and my daughter Rebecca Keyser.
5th: And lastly I do hereby constitute and appoint my son David Strickler and Wm M Dorrough Executors of this my last will and testament hereby revoking all other former wills made by me in witness  whereof  I here unto set my hand and seal this 4 day of September 1857.
Martin Strickler
Signed sealed and delivered by the aboved (sic) named Martin Strickler as and for his last will and testament in the presence of us who at his request has hands subscribed our names as witnesses:
Moses Hent???, Henry Comer, Daniel Kite
Page County Court
At a court here foresaid county on Monday the 27 day of October 1857.  The last will and testament of Martin Strickler was presented to the court and proved by the oaths of Moses Hent?? And Daniel Kite two of the witnesses thereto and is ordered to be bound and on the motion of David Strickler and Wm M Dorrough the Executors therein named who made oath thereto and together with James Kibler and Chesebim (sp?) Hershman as their securities entered into and acknowledged on bond in the penalty of $5000 conditioned according to & in a certificate is granted the said David Strickler and William M Dorrough for obtaining a probate of the said will and testament.