I have written a couple of times about my grandfather, Celio “Jay” Capelli.  He was born Celio Ciardonei in Cossano Canavesse, Turino, Italy on December 31, 1914.  His parents were Matteo Ciardonei and Adele Siletto.

On March 22, 1920, Celio (5 years old) and his father, Matteo Ciardonei, arrived in the United States on the SS Dante Alighieri.  According to the ship’s manifest, Matteo was deported March 31st because he had been diagnosed with tuberculosis.  This information came from the passenger manifest found on Ellisisland.org almost 10 years ago.  I got a printed copy for my Grandfather for Christmas about 8 years ago.

Yesterday, with the free access to immigration records at Ancestry.com, I found another piece to the story.  Since I do not have a digital copy of the passenger manifest, I did a search for the last name “Ciardonei.”  I was surprised to see several entries for both Celio and Matteo.  When I opened each digital image, I realized that they had been included on additional lists in the ship’s paperwork.  Specifically, the Record of Aliens Held for Special Inquiry and the Record of Detained Aliens.

The Record of Aliens Held for Special Inquiry states that 31 year old Matteo was hospitalized upon arrival and given a “tuberculosis cert” designation.  He was deported on April 12th at 1:45 pm on the SS Guiseppe Ver??an.  Celio was admitted to the U.S. on March 31st at 10:55am.

The Record of Detained Aliens lists my grandfather being held with other passengers from the Dante Alighieri.  He was fed 8 breakfasts, 7 lunches, and 8 dinners during his detainment.  He was released on March 31st.  The Disposition column for the other passengers lists the addresses of where they were going.  My grandfather’s entry is blank.  It is interesting to note that almost everyone else on the list had a Cause for Detention listed as lack of funds.  My grandfather’s Cause for Detention is “father in hosp.”

These documents made me very sad last night.  I had known that Matteo was brave and left his son with his sister-in-law when he was deported.  I had never considered what had occurred between the time Matteo and Celio arrived and when Matteo was deported.  It must have been so scary for a 5 year old to be separated from his sick father and be detained for a week.  He did not know any English at the time so communication must have been difficult.

The only glimmer of hope that I see in these documents is that my grandfather was detained for only 8 days (as indicated by the number of meals).  His ship arrived 10 days prior to his release leaving us with a 2 day difference.  I am hoping that he got to spend the time with his father in the hospital during those 2 days.  It would have been the last times they would see each other.  Matteo died in his hometown in Italy just under a year later on Mar 14, 1921.

I will end on a positive note.  I also found a Lucia Siletto Brunero on a passenger manifest in 1938 last night.  She listed that she would be visiting her son, Salvatore Siletto.  I have previously documented that “Sal” is my grandfather’s uncle.  So it seems that my grandfather got to visit with his grandmother when she came to visit in Pittsburgh, Pennsylvania.  It would have been the first time he saw his grandmother in at least 18 years.

I have written a couple of posts about my paternal grandfather, Celio “Jay” Capelli.  He was born Celio Giuseppe Ciardonei on December 31, 1914.  His parents were Matteo Ciardonei and Adele Siletto.  They lived in Cossano Canavese.  It is a small town northeast of Torino in the Piedmont region.

In May 2006, I got the chance to drive through the town that my grandfather was born in.  Unfortunately, the visit was not a research trip.  We drove through on a Sunday and everything was closed including the local cemetery.  I hope to spend some time in Cossano Canavese one day.  Here are a few pictures from that trip. 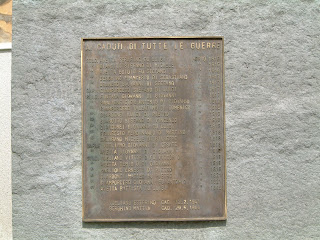 A plaque honoring those who died in WWI.  I have several
Ciardonei’s listed.

Today is the 4th of July.  The day to celebrate the independence of this great country.  The most common ways to celebrate are barbecues, fireworks, and parades with lots of American flags.  I would also like to celebrate by telling you a little about my paternal grandfather.  Celio “Jay” Gordon Capelli lived the American Dream.

Jay was born in Cassano Canavesse, Turino, Italy on December 31, 1914.  His parents were Matteo Ciardonei and Adele Siletto.  On March 22, 1920, Celio (5 years old) and his father, Matteo Ciardonei, arrived in the United States on the SS Dante Aligheri.  According to the ship’s manifest, Matteo was deported March 31st because he had been diagnosed with tuberculosis.  Matteo was a strong man because he left his young son in the United States with his sister-in-law, Mary (Siletto) Capelli.

Jay grew up in the Capelli household in Pittsburgh, Pennsylvania with his 3 cousins, Mabel, Bruno, and Elsie and his aunt and uncle, Mary and Alfredo (Fred) Capelli.  Jay became a citizen of the United States on February 25, 1937 when he was 22 years old.  He also changed his name at this time to Capelli.  My grandfather attended Duquesne University, majoring in accounting.  He also served as a Quartermaster in the Army during World War II.

My grandfather met my grandmother, Mary Dempsey in Pittsburgh and they married February 15th, 1947.  Later that year,  they migrated out west to California with my grandmother’s brother.  They settled in Los Angeles and had three children.  The oldest boy being my dad.   The kids grew up in Anaheim and my grandparents moved to Mission Viejo during the 1970’s.

Jay was ninety four when he passed away just over 2 years ago.  He was a hard working man who loved his family deeply.  I remember being in high school when he finally retired from being a CPA at 80.  He loved to go bowling and did so until his late 80’s.  There are many family photos of Jay camping with his family.

He was hard of hearing in his later years.  I will never forget the first time I visited him after he got his hearing aids.  There was a look of astonishment on his face when I spoke to him.  I realized that my voice had been out of his hearing range for years and he was excited to hear what I sounded like.

One of my most favorite memories of my grandfather is from Christmas about 7 or 8 years ago.  I had found the passenger manifest for his arrival in the U.S. on EllisIsland.org and ordered a copy of the manifest and a photo of the ship to give to him for Christmas.  He was so amazed by the gift!  It made me so happy to be able to bring a piece of his past to him.

It is amazing to think that my grandfather did it all in this country.  He immigrated here as a young boy, learned a new language, grew up in a loving family, attended university, became a U.S. citizen, served his country in war, found the love of his life, followed his dreams out west, and raised a family.  He really did live the American Dream.