This is a photo that was in my grandmother’s possession.  I made digital copies of many of her photos over the years as I would visit.  It was always a fun time to hear her stories as we looked at the photos together.  She always did her best to identify who was in each picture.  Sometimes we were able to identify some or most of the people but not all.  This picture is a good example of that.

This photo was taken about the early 1940’s.  I do know that Laura Mitchell passed away in 1947. My estimation for the photo comes from the age of my grandmother in the photo.

The people in this photo are a mix of families.  Dudley, Laura, and Tava (Nancy Octavia) were all siblings in the Mitchell family.  Tava was married to George Gragg so the Unknown Gragg in the photo could be George Gragg or one of her sons.  Wendell Elliott is the son of Lawrence Elliott.  Lawrence Elliott was married to Opal Strickler’s sister, Ruby.  My best guess is that she took the photo. These families were very interconnected because Lawrence Elliott was Dudley’s nephew and brother-in-law (read more about that here).

If you would like a copy of this photograph, I am happy to share a clean copy without names.

***Family – if you recognize any of the unknowns in this photo, it would be greatly appreciated if you would pass on their names!! 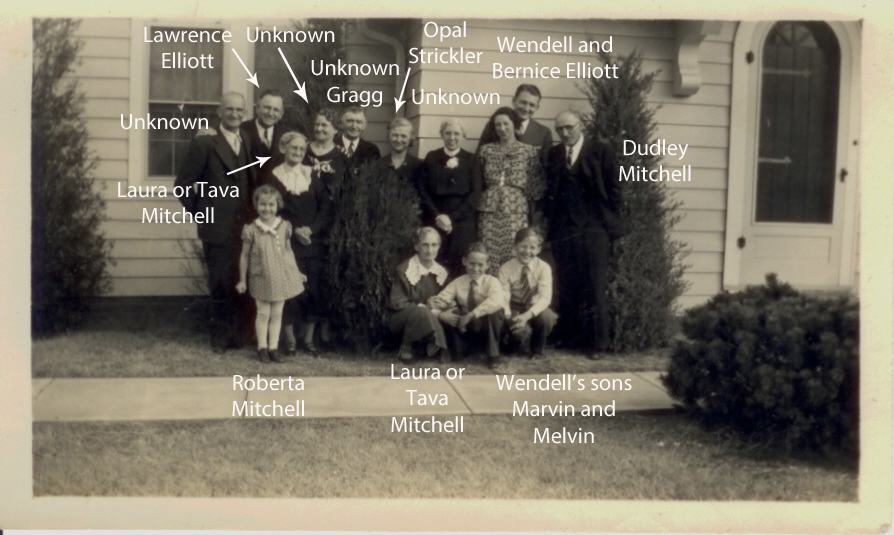 Dudley Moses Mitchell and Opal Blanche Strickler are the parents of my maternal grandmother (great-grandparents).  They were set up on a date by Lawrence Elliott.  Lawrence was Opal’s brother-in-law and Moses’ nephew. Despite a fifteen year age difference, Opal and Moses fell for each other and were married December 20, 1916 in Topeka, Kansas.  They raised five children together, two daughters and three sons.  To find work during the Depression, the family moved to Hutchinson, Kansas.  They remained there the rest of their lives. 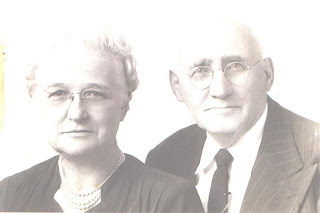 Opal and Moses are buried together at the Penwell Gabel Cemetery in Hutchinson, Kansas.  I got the chance to pay my respects last October on a research trip to Kansas.  The morning we visited Hutchinson was a brisk 30 degrees and windy.  These photos were taken very quickly before returning to the warmth of the car! 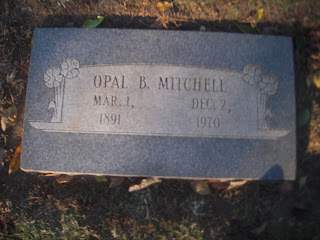 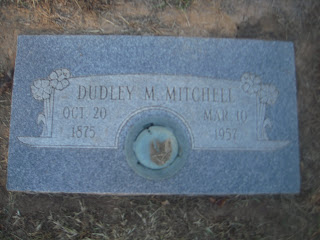 Lawrence Elliott has the special distinction of showing up in two different family lines in my family tree.  Here is how:

Lawrence was born Feb 26, 1892 in Hoyt, Kansas to Lewis Elliott and Melinda Mitchell.  On December 12, 1912 he married Ruby Strickler in Fall River, Greenwood, Kansas.  Ruby Strickler was born May 28, 1894 in Narka, Kansas to Abraham Strickler and Effie Amner Flock.

Ruby was the middle daughter in a family of 1 son and three girls.  The brother died as an infant. Opal was born second on March 1, 1891. Emerald was born last on April 1, 1902.  After Lawrence and Ruby were married, Ruby set her older sister up with her husband’s uncle, Dudley Moses Mitchell.  Dudley Moses is the younger brother of Melinda Mitchell, Lawrence’s mother.

Despite a fifteen year age difference, Opal and Dudley hit it off and were married on December 20, 1916 in Topeka, Kansas.

After the marriage, Lawrence became twice related.  He shows up in both the Strickler family line and the Mitchell family line.  Lawrence was related to Dudley Moses as his nephew and brother-in-law at the same time.  He is my 1st cousin twice removed and the husband of my great great aunt.