This past Wednesday, January 31, 2014, my grandmother, Roberta Fleming passed away peacefully with her family around her.

She was known by many names including Mom, Grandma, Aunt Roberta, Birdie, and the Silver Fox.  A couple of years ago when my children, her great-grandchildren, were born we added another name, Gigi.  It was her short hand for Great Grandmother.  She wanted a fun grandma name.

My grandmother was born Roberta Irene Mitchell to Dudley Moses Mitchell and Opal Blanche Strickler on January 10, 1931 in Topeka, Kansas.  She was the youngest of five children with one older sister, Loretta, and three older brothers, Raymond, Delbert, and Kenneth.

Her family moved to Hutchinson, Kansas during the Depression. Grandma stayed there until she attended X-Ray Technician school in Topeka, Kansas.  While at school, she met my grandfather, William Henry Lawbaugh.  They married in 1950.  The couple starting raising their family in Pratt, Kansas with their first three children.  They relocated to the Anaheim, California area in the late 1950’s.  There they added to the family a set of twins.  In 1964, Bill Lawbaugh passed away leaving his wife with 5 children.  Roberta went to work to provide for her family.

In 1973, Roberta married James Fleming.  They joined their families Brady Bunch style, five from her side in addition to the four children Jim had. They lived in several cities in Los Angeles and Orange counties. I have many memories from my childhood of them being together.  In fact, I learned how to swim in their pool when they lived in Downey, California.  After their time in Downey, they moved to the desert, living in the Cochella Valley.

After Jim Fleming passed away in 1994, Grandma moved back to the beach.  She loved the ocean and was at home in San Clemente, California.  This was during my college years in San Diego.  At least once a month I would make the 45 minute drive north to spend the weekend with her.  We had so much fun together!

All of the facts above do not capture the entire picture.  My grandma was fun and feisty.  She LOVED her children.  It would not be a complete day without a Crown Royal and cigarette, even her dog enjoyed cocktail hour with a piece of ice.  Her house was never quiet, either the news channel was on the TV or she was playing her beloved big band music.  She loved to dance.  Our family has the great memory of dancing the night away at my cousin’s wedding this past summer.  While she was not interested in researching her family herself, she was always willing to tell me stories of her childhood and what she remembered of others in her family. Grandma was a horrendous driver.  We were always offering to chauffeur her places.  She was an avid Bridge player.  The drawer of her coffee table has many sets of playing cards and bridge score sheets.  Grandma was very neat and clean.  You were always careful to make your bed and clean up after yourself at her home.  Most of all Grandma loved being with her family.  Holidays were always big affairs with lots of food and football.  Most Sundays were spent with family on the beach.  The beach was a slice of heaven for my grandma. 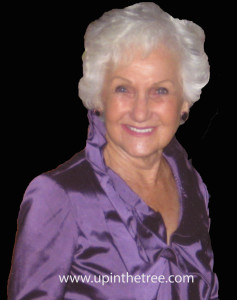 I could go on and on.  She is going to be so greatly missed.  I have to take comfort in how she taught us all to be a family.  I know that although she is no longer at the head of the family, we have each other.

I love you grandma!