William Henry Bender is my 3rd great grandfather.  (William Lawbaugh > Effie Bender>William Henry Bender)  He was the first child born to John Bender and Matilda Shireman on May 23, 1868.  Records show he was born in Pennsylvania.  The family moved to Kansas in 1876 or 1877.  They settled on land between the towns of  Halstead and Sedgwick which are located about 25 miles northwest of Wichita.

William had 5 younger brothers and 2 younger sisters.  Tragedy struck the family when the youngest, Leroy, died in 1884 at 6 months old.  There were more happy times as William married Mary Bradley on Thanksgiving Day in 1887 (November 24).  Mary was from several miles down the road in the town of Halstead.  On my trip to Kansas in October 2010, it was easy to imagine William riding a horse to town to see his girl.

William and Mary quickly started their own family.  Their first born, a son named William, arrived in 1888.   I have not found any death records for William but he may have died in 1889 around the same time of his Aunt Ella.  Ella was William’s youngest sister who passed away just a few weeks after her 8th birthday in April 1889. 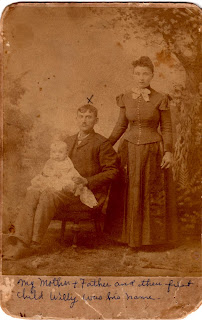 William and Mary lived in the Riverside Park area of Halstead.  This is just north of the downtown area and across the river.  We tried to find the home on our trip to Kansas but it was no longer there.  There was evidence that a home had been on the property at one time.  The 1900 U.S. census lists William working as a Teamster.

William died at the early age of 34 on October 4, 1902.  His children ranged in age from 1 to 12 at the time of his death.  His obituary says that he had been ‘in poor health for several months’ before his death. William’s headstone is located next to his parents and younger siblings at the Pleasant Valley Cemetery just outside of Sedgwick.  It reads ” W. H. Bender, born May 23, 1868, died Oct 4, 1902, dearest father thou hast left us and our loss we deeply feel. But tis god that has bereft us he can all our sorrows heal.” 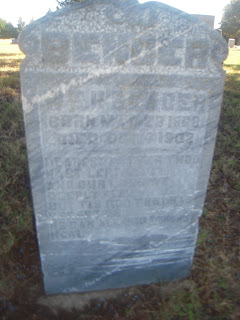