The biggest news in genealogy this week was the release of the 1940 Federal Census on Monday, April 2nd.  The week started off with a few bumps but has largely been a success for me.  One of the positives about living on the west coast is that when I woke up on Monday, news was already spreading about the insane number of people trying to access archives.org.  I decided to wait until Tuesday to take a peek at my ancestors.  This plan was somehow communicated to ancestry.com and they loaded the states I needed first (Haha – they did a great job getting all 3.8 million images loaded).  I am extremely happy to say that I have found 7 out of 8 grandparents (I was looking for my husband’s grandparents too.)  The only one missing is a grandparent that lived in Chicago at the time.  I do not have an address for her and Chicago is way to large to just scroll through the images.

I plan on using the Census Sunday theme to share my finds in the 1940 Federal Census.  I will start this week with the Ida Austin household in San Francisco, California. 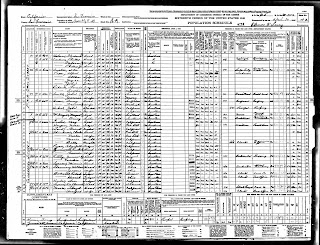 I laughed out loud when I read that all of the people listed had a relationship as lodger.  All of the other families on the sheet have more conventional relationships listed such as wife, daughter, step-son.  Althea is Ida’s daughter.  She is living with her husband and two children in her mother’s home.  Sophia is Ida’s sister and Louis is Sophia’s husband.

I would love to peek into the past to see who answered the questions of the enumerator.  No one in the household is marked with the X in a circle.  It is possible that one of the neighbors answered the questions for this family.  Since everyone in the household is listed as living in the same house in 1935, they obviously have been living as an extended family for some time.

Ida Austin owned her home and it was valued at $8000.  She made $1470 the previous year and appears to be the only person in the household working.  This is pretty amazing since her age is listed as 65 in 1940.  Grandpa John tells me that his grandmother worked at Columbia Outfitting Company.  Alfred is listed as a laborer but he did not have any income.

The education column is also interesting to me.  Alfred Pope is listed as having only 4 years of education.  When I asked Grandpa John about that, he told me that his father took classes at UC Berkeley.  This might be another indication that a neighbor answered the questions about the family.