Dudley Moses Mitchell is my great-grandfather.  I found Dudley and his family residing at 630 19th West, Hutchinson, Kansas in the 1940 Federal Census.  During a research trip to Kansas in 2010, I took photos of many city directories in Hutchinson spanning the years 1937-1958.  This made it easy to find my family.  I also found a collection of index cards for Sanborn Insurance including photos on the back of each card.

Dudley rented the house pictured above for $18 a month.  Dudley worked as the store manager of a grocery store in Hutchinson.  He only worked 6 weeks in 1939 and shows in income of zero dollars.  His sons, Raymond and Delbert also worked in the grocery store.  Raymond was in the meat department and Delbert worked as a clerk.  Raymond work for 40 weeks in 1939 and had an income of $350.  Delbert only worked 14 weeks and made an income of $112.  I believe that Delbert only worked 14 weeks since he was also in school. 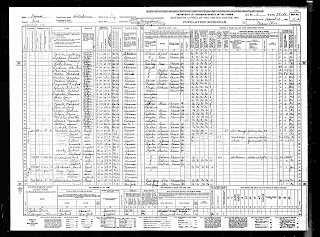 My grandmother has always told us that she grew up without much money.  This census enumeration documents that there were 8 people in the household living off of $462.  Times were not easy.  Most of the families on other pages in Hutchinson had an average of 4 people in the household and were making $800-1000 a year.
I found Loretta Mitchell Cogzill living nearby with her new husband, Grant Cogzill, at his parent’s house.  Loretta is the mother of Robert and Richard.
Please follow and like us: