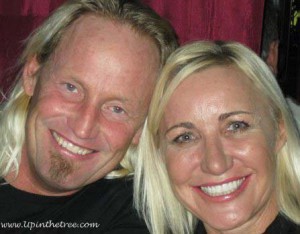 I clearly remember the day my Aunt M was married. My Mom & I had stayed at her house the night before and helped my Aunt get ready that day.  I was officially in charge of the guest book at the church. At 12 years old, I took my duties seriously.  No one was missed in the book because I snagged everyone as they walked into the church.  It meant a lot to me to be included that day.

Unfortunately, the marriage did not stand the test of time. All is not sad though because my cousin C is the best part of that union.

My Aunt M has had different long-term boyfriends over the years. I liked some of them more than others.  Some fit in among our family better than others.  We are a loud, happy bunch that can easily overwhelm.

Things changed three years ago when Aunt M met Andrew. They were introduced by friends and were quickly taken with each other.  Andrew made an immediate impression on anyone he met with his long, blonde surfer hair and huge smile. He was always dressed stylishly (this usually included something with argyle or plaid on it).

The first time I met Andrew, we were at a family weekend at my Grandmother’s home. I was amazed how Andrew fit into our family so smoothly. There was no question, Andrew loved my Aunt M and he was part of the family immediately.

The last three years I have had the pleasure getting to know Andrew.  Like everyone else in my family, I have had some wild conversations with him.  He had a busy, fun filled life and was willing to tell you all about it (the good, the bad, and his belief in aliens).  Andrew was smart and could catch you by surprise with his knowledge.  He was always concerned that everyone around him was okay.

I personally was excited that Andrew also had an interest in family history.  He took great pride in his Scottish roots.  He would listen to the stories of our family without his eyes glazing over.

A year ago, we all gathered in the Outer Banks, North Carolina for my sister’s wedding.  Andrew was the most stylish man in attendance.  He had to be since he brought two suitcases full of clothes to choose from.  I could not help but laugh at how some of the East Coast guests did not know what to make of the blond surfer from California.  It was such a wonderful week with family.

While my Aunt M will tell you that Andrew is the love of her life, they did not marry.  They lived together and were committed to each other for the long haul.

Andrew unexpectedly passed away on July 20, 2012.  We all gathered to remember Andrew the following weekend.  A testament to Andrew, so many people showed up for his memorial service that not everyone could fit into the chapel.  There was another room of people watching on tv monitors.  The next day a large group paddled out into the Pacific Ocean and paid tribute to Andrew as his ashes were spread over his favorite place.

Andrew was survived by his father, stepmother, three sisters, and brother.  He was also survived by Aunt M, Cousin C, and my family because although he was not legally ours, we considered Andrew family.