John Pope is my husband’s grandfather.  Last year Grandpa John, who is a young 84, was very ill and we were worried that we would lose him.  Our family was very fortunate that John agreed to surgery and is now back to his active self.  During one of our visits last Fall, Grandpa John, husband John, and I were talking about the time Grandpa John spent in Alaska with the Coast Guard.  I was so happy to have my Iphone with me.  I was able to record the conversation using the voice memo app. 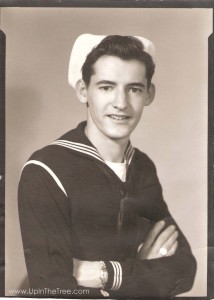 John enlisted in the Coast Guard the day before his 18th birthday in November 1945.  He chose to enlist in the Coast Guard to avoid the draft and possibly end up in the Army.  One of John’s friends was already in the Coast Guard and worked on the San Francisco Bay.  This friend tried to get John assigned to his unit but unfortunately for Grandpa John, he was sent to Alaska instead.

Out of boot camp, John boarded a train full of other enlisted me bound for Alaska.  The train stopped in Seattle and the men then boarded a ship called the Rolling O.  The ship had a round bottom and was constantly rolling even in the calm waters of the inside passage.  Most of the men on the ship had never been on the water before and were very ill for the ride.  John remembers a dog they picked up in Ketchikan was sliding back and forth across the deck.

Out of Ketchikan, the ship began dropping 5 or 6 men off at a time to different Coast Guard stations in the Aleutian Islands.  Umnak Island was the final destination for Grandpa John, his buddy, Al Miller, and several other men.  Umnak Island had a Loran radio that was monitored by the radiomen 24 hours a day.

According to Wikipedia, Umnak Island is the third largest island in the Aleutian Chain at 72 miles long and 16 miles wide.  It has a volcano that erupted as recently as 2008.  As of 2000, it was inhabited by only 39 people.  Grandpa John remembers there being a few dozen people on the island including a rancher that lived nearby.  He described the island as desolate.  There was a large pond that served as their drinking water.  The station was located above the ocean on a cliff.  Each day they had to climb even higher to reach the radio station.

When the men arrived on the island, none of them had been trained for specialty jobs.  The man in charge simply asked who wanted to cook.  A man nicknamed Frenchie answered the he enjoyed cooking so he became the chef.  Al Miller, mentioned that he like to tinker with cars so he became the mechanic who was in charge of keeping the generators running at all times.  Al did not know anything about diesel but learned quickly.  Grandpa John did not raise his hand for any of the jobs so he became a scope dover.  John had to climb to the Loran radio each day and watch the scope while the engineers who had been trained at Loran school ran the radio.  Grandpa John claims that he was not very proficient at watching the scope.

John told us about down time on Umank island.  There was a pool table and ping pong table but they were rarely used. When not working, the guys would go hiking, fishing, and hunting.  There was trout in the tundra streams.  When the Salmon would come up the streams, they would be so thick you could walk across the stream.  The men enjoyed the freshly caught fish since all of the dry food was brought in by boat and they had no refrigeration.  The electricity produced by the generators was focused on keeping the radio running.

At the time, the island was teeming with eagles.  The rancher who lived nearby hated the eagles because they would attack his sheep. Sometimes the men would check out rifles and try to shoot down eagles.  John says that they rarely hit any.

Although John had a 3 year enlistment, he only spent about 6 months on Umnak island.  His decision to not raise his hand for a job turned out to be a good thing.  The men with permanent jobs stayed on the island while John was transferred to Ketchikan to finish his enlistment.  I will tell you more about his time in Ketchikan in another post.