Frederick Hudson is my 3rd great grand father on my maternal side. 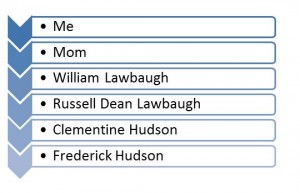 I found this obituary at the Kansas State Archives last weekend.  I was so excited to find an obituary that offered so much information!  Definitely another dancing at the microfilm reader moment.  You know you are among friends when other researchers do not look at you funny but instead smile at your victory dance.  My favorite part of the obituary is the description of the moments when Fred passed away.  La Cygne is pronounced La Scene.  Thank you to my Kansas cousins for teaching me this!!

Fred Hudson died at his home in the south part of town Tuesday evening.  He had been a resident of La Cygne since 1880 and had an active part in building the town.  Bricklayer and plasterer by trade, soon after coming here he started a brick yard and began manufacturing brick.  Most of the brick buildings in town are built with the Hudson brick.  Because of failing health Mr. Hudson quit active work several years ago.

When about nine years of age he came with his parents to America, making the voyage in a sail ship.  Landing at New Orleans he traveled up the Mississippi River to Illinois, where he grew to manhood and worked with his father at the bricklaying and plastering trade which he followed so many years.

He was married to Sarah G Morris at Milton, Ill., on December 30, 1855.  To this union were born ten children, four of whom are still living and were with him when the end came.  With his family he moved to La Cygne, January 1, 1880 and since the death of his wife, 19 years ago he has made his home with his son Ralph and family who have cared for him so devotedly, sparing no pains to make his life as pleasant as it was possible to do.  Two or three years ago he suffered a stroke of paralysis but recovered sufficiently to be around most of the time, until last Friday morning when he had a serious attack and never fully regained consciousness.  He made a confession of religion in his early manhood and later united with the Christian church at La Cygne during Rev. Irwin’s meetings several years ago and was one of the deacons of the church for some time, but owing to his age and failing health he had not been very active in church work in late years.

He was an honest, upright citizen, honorable in all his dealings, a good neighbor, a devoted husband, a kind and loving father and a friend to those in need.  He bore his sufferings patiently with never a murmur or complaint, and after a life of usefulness he passed peacefully away just as the sun was sinking to rest, and when the spirit was taking its flight he quietly laid his hands down as though he had finished his work and passed to his reward.  His wife and two sons, W.B. and George H., and one daughter, Mrs. Belle Howard preceded him in death several years ago; also three children died in infancy.

He leaves one son, Ralph, of La Cygne; three daughters, Mrs. Clem Lawbaugh of Wellington, Mrs. Minnie Hetzer and Mrs. Sytha Moore of Parker, eighteen grand children, eight great-grandchildren and a host of relatives and friends to mourn his loss.

Funeral services were conducted by Rev. Boyer at the home of Mr. and Mrs. Ralph Hudson and the body was laid to rest in Oak LawnCemetery.

Those from out of town for the funeral were: Mr. and Mrs. C.A. Moore and children and Mr. and Mrs. L.H. Hetzer of Parker; Mrs Clem Lawbaugh and son of Wellington; Mrs. Ida Hudson, Mrs, Irvin Wagner and Mrs. Hazel Smith of Kansas City; Fred Moore of Miami Station, Mo.