January started with my being dragged into a genealogy black hole.  Haha! Let’s be serious.  It was more like I jumped in head first since I was so excited. The culprit was digitized civil records for the small town in Italy where my father’s paternal line originates.  I have found over 25 birth, marriage, and death records to date.  I still have more records to locate but they are taking some time since I need to scan page by page for differing date ranges.

This marriage record for Giacinto Maglione and Maria Anastasia Salarano is one of the documents I have found. 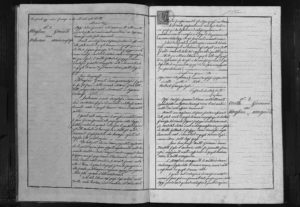 I am very curious to know the story of Giacinto and Maria.  I have found no indication that Giacinto was previously married.  This is usually stated clearly in the church records.  His line for previous marriage has a line through it.  He is from a family who is more financially stable or has money since he is not referred to as a peasant.  Also, since Maria is only able to leave a mark, while Giacinto leaves a signature, she has less education.  Their children were born after the marriage occurred. I wonder what brought them together.  Was it love, arranged marriage, financial deal?  I will probably never know.

My favorite part of this document is the end.  There is a signature from Giacinto and a mark made by Maria.