Genealogy research moves at a slow steady pace most of the time. Sometimes research can move in leaps and bounds and then come to a screeching halt. In those cases, I hope you were wearing your seat belt! The whiplash of excitement and frustration can leave you dazed.

Today is the perfect day to tell you what I have learned in the last week.  It was more of a seatbelt kind of week.  It all started with DNA test results.  All three DNA tests I ordered with the New Year’s sale had results posted last Monday, April 10th.  For each account, I quickly logged in to view matches and estimated origins.  I also created a gedcom file for each person to upload to their family tree.

I decided to take a quick look in Family Search and Ancestry.com before uploading the gedcom files to ensure I had the most complete tree possible for DNA matches to view.  The first search was for the DNA profile for my husband’s grandfather.  The family tree I have for him is on the limited on the paternal side.   Grandpa John’s grandfather was the entryway ancestor on this line.  John Pope (Poppe) arrived in the United States from Germany in the early 1880’s.  By the late 1880’s he is living in San Francisco and owns a brewery with his partners.

To my surprise, there was a new hint for John Pope (1862-1917) at Ancestry.com.  It turns into a jackpot moment! The hint contains a passport application from 1909. 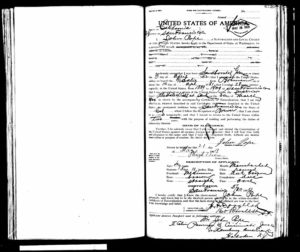 The passport application confirms John Pope was born 3 April 1862 in Sandbostel, Germany.  It also gives us new information that he immigrated to the United States about the 10th of April 1881 aboard the SS Salir from Bremen.  The application also states John Pope had been living in San Francisco since 1889.  The biggest jackpot was John Pope listed he had become a naturalized citizen in the Superior Court of San Francisco on 30 March 1904. YES!

After my celebration dance at the dining room table, I took the time to analyze each piece of information.  This is when my YES turned into a NO.  It also ties into why today is a good day to tell this story.  Today, April 18th, is the 111th anniversary of the 1906 Earthquake in San Francisco.  The 1906 earthquake killed approximately 3,000 people and left over 80% of the city in ruins after the fires broke out. Most genealogists who do research in this area divide their research into before and after 1906 due to the fires and the documents which were destroyed.

The naturalization papers filed in 1904 are most definitely gone.

I was still really excited to share this new document with Grandpa John this past weekend when we visited for Easter.  On Saturday, my husband spent some time with his grandfather assisting him with some computer issues. While they were occupied, I took the Pope binder off the shelf to browse. Grandma Shirley was a genealogist and did an incredible amount of research in the pre-internet days.  She left 3-ring binders for each family with all the research she had accomplished.  About 10 years ago I scanned everything in the binders to ensure the information is not lost in case of disaster.

I realized flipping through the binder this weekend, I had not done a complete job of scanning documents.  I had scanned all the certificates, newspaper clippings, photos, etc.  I did not scan the handwritten notes in the pockets of the divider pages.  This was a major mistake.

In the binder divider, I found this sheet: 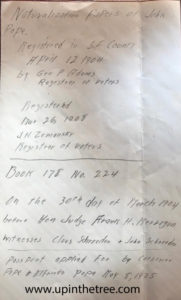 These undated handwritten notes are in Grandma Shirley’s handwriting.  They clearly state the original filing of the naturalization paperwork.  They also state the papers were re-filed with the courts in San Francisco on 26 March 1908. MAYBE…

The rest of this week I already have planned but next Monday or Tuesday, I will be in San Francisco trying to get copies of the re-filed naturalization paperwork. It has been a fun ride in the last week.  I am glad I had my seatbelt on.  Hopefully we will continue this story by returning back to YES.