Last summer I spent a few weeks with my kids at my parents home.  They live on Lake Occoquan in Northern Virginia.  We had lots of fun paddling stand-up paddle boards and taking rides on the boat.

The Lake Occoquan Reservoir was formed in the 1950’s when 2 dams were built on the Occoquan River just east of the town of Occoquan, Virginia.   The reservoir holds 10 billions gallons of water and supplies Fairfax County and half of Prince William county with drinking water.

The area of land at the top of my parents driveway has a section of dirt road that runs across it with trees on either side.  I am going to be a little vague about the name of the road in order to protect my parent’s privacy.  The name of their street is the name of the river crossing (ford). 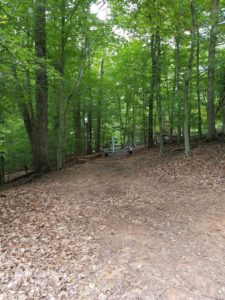 My father has spoken to his neighbors and found out this small section of road was what was left of the old road from the 1800’s.  It goes across my parents land and then is under the current paved road for a while.  The dirt road then reappears on the neighbor’s land heading down to the water.

A neighbor informed my dad this road was one of only a few safe places people could cross Bull Run in the 1800’s.  Some people in the neighborhood have found Civil War rifle bullets.  The story is there were skirmishes at the river crossing (ford) with the Union and Confederates firing across the river at each other.

This past summer we made a cool discovery while out paddling on the river.  My dad, kids, and I had paddled up the river a little bit into a more shallow area that is off the main river.  My kids have named this spot Pirate’s Cove.  We paddle over there to search for pirates and treasure.

The trees hang over the lake in this cove.  I sat down on my paddle board for a minute to help kid #2.  From this vantage point I could see under the branches. I realized I could see a cleared area.  I moved my board to a different position in the cove and realized this was the other side of the dirt road.  After wagons went across my parents land and Bull Run, they would have traveled back uphill at this point. 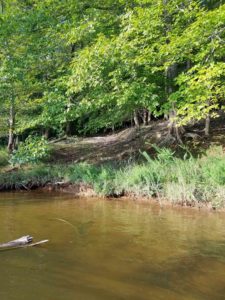 After returning from our paddle adventure, I began googling for any information regarding the fords on Bull Run.  I was excited to find a Civil War map that has been digitized and available on the Library of Congress website.

Sure enough, the crossing close to my parents house is on the map.  According to this map, the ford by my parents house was a secondary route and not as well-traveled as the main road fords.  This does not surprise me.  The next ford up river is still the location of a main road today.  In fact, as you drive across the current concrete bridge you can see remains of the old stone bridge that once was the road.

The most likely scenario is that the ford near my parent’s house was in a very shallow location.  This would have allowed wagons to cross without danger.

I also located a 1901 map of Prince William County at the Library of Congress.  The ford near my parents house was no longer on the map.

Next summer we will return for another long visit.  I hope to find time to explore the road up the east side of the river.  I also plan to visit more of the local historical societies to see if I can find more information about the neighborhood and fords.