Agnes Marie Mattson is my husband’s great-grandmother.  She kept a newspaper clipping diary from 1928-1931.

Seized with cramps in deep water, Carl Mattson, 15-year-old son of Mr. and Mrs. J Long of 2 Wright street, San Francisco, had a narrow escape from drowning yesterday afternoon in the Russian River at Vacation Beach, near Guerneville, when his brother, Albert, 18, and Albert Saaransen, 19, plunged to his rescue.

The boys, who are vacationing on the Russian River, were swimming at the beach.  Mattson swam out into deep water and was seized with cramps before he could return to the beach.

He shouted for help and was able to keep afloat after going down once until the other two boys reached him.

He is a brother of Mrs. Frank Gingg, of this city. 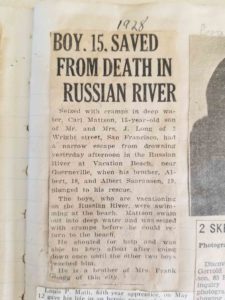 This is a google map of of Vacation Beach, California. Carl and Albert most likely visited their sister in Santa Rosa on the way out to their vacation.