This past weekend I received an envelope from my Dad in the mail.  He was recently cleaning out desk and found some papers he thought I might enjoy seeing.  Most of the photocopies are things I made as a kid that my parents kept.  It was fun to get a view of my child self.

There are also two newspaper clippings in the envelope my Dad sent me.  The first one I read was titled “Man shot to death by a police officer.”  It tells the story of a man who beat up his girlfriend at Mile Square Park in Fountain Valley, California.  He then fought with a group of picnickers who stepped in.  There was off duty police officers at the park attending a neighborhood watch picnic at the same time.  They stepped in when the aggressor returned to the fight with a hammer and shears.  After repeatedly telling the man to drop his weapons, he lunged at the one of the officers and was shot.  He died minutes later on the way to the hospital. 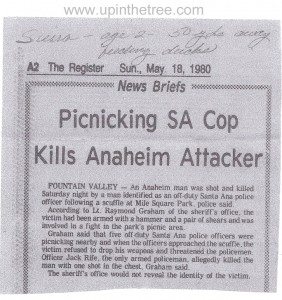 The second newspaper clipping looks to be from the Orange County Register, 18 May 1980.  It is titled “Picnicking SA Cope Kills Anaheim Attacker.”  This article repeats the story as told above.  The most important thing about this article is what is written in the margin.  In my Mother’s handwriting, it says, “Sierra – age 2- 50 yards away feeding ducks.”

I knew what these articles were about because my Mom had called me when my Dad found them in his desk.  She had never told me about being at the park that day because she had simply forgotten about it.  We lived nearby in Huntington Beach, California at the time.  It sounds like we went to this park a lot together while we lived in the area.  We were present and a little close for comfort when the police shot the man who attacked them.

It occurs to me that these newspaper clippings would be pretty much meaningless without the notes in the margin of the second one.  The only names mentioned in the articles are those of the man shot and the off duty police officer who shot him.  I would have no idea my Mom and I were present if I did not have any clues.

If you find newspaper clippings in your family’s possession that seem random, they might not be.  It could be an event that they were present at but not named.  It is definitely worth more investigation!